"I am not fucking around in any way whatsoever" 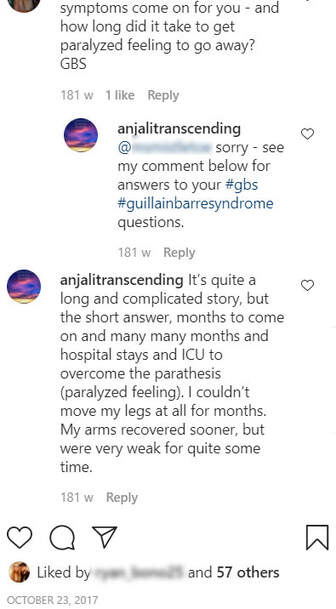 Medical records should of course be a private matter until the person wants to reveal them. Añjali has revealed several ailments she's had to deal with over the past few years, many of which can affect brain health. This would appear to be relevant when assessing the likelihood that she is in communication with, and has physically met with, higher beings inside a mountain base in the Mojave desert.

Following are the conditions and illnesses Añjali has openly mentioned:

​ ​ ​ ​ ​ ​ ​ ​ ​​ ​
On Aug 8, 2021, Añjali wrote on Reddit: "IF it were to sadly turn out that I was the victim of some sick, elaborate, and hypnotic scheme, I would only double-down on my resolve and commitment to honesty, responsibility, and transparency, and make it my mission to expose the people behind it. Please understand, all of you who read this — I am not fucking around in any way whatsoever."

On Feb 23, 2022, Anjali wrote in a text message (which she released to the public in March):
​"I have confided in a board certified medical psychologist my experience at your home (no names), my experience since, all of my social media and interviews. I have fully submitted to mental evaluations, tests, questionnaires, and I have been found to be mentally healthy, not suffering from delusions, hallucinations or psychosis, or any related mental condition that would explain my ongoing experience."

Text message to "Wayne & Trisha, Feb 23, 2022. Although there is no evidence of a tunnel leading to alien base, and no means by which Wayne could've excavated one, Anjali claims she is not suffering from delusions.

Anjali has always denied her experiences relate to psychedelics (specifically DMT, which causes some users to experience entities). More specifically, she denied she was on any drugs during her experience on the property where she claims she met aliens inside a mountain. This was proven false when the host couple came forward in February 2022 saying she took highly potent THC (Rick Simpson oil), which makes you stoned and affects memory formation. Anjali's own admission that she forgot and re-remembered the event repeatedly, and that she thought the ambulance came between 10PM-midnight and not at 5PM when it actually came, demonstrate that her memories of the experience are not at all clear. While THC may not have caused hallucinations, it's plausible she mis-remembered her confusing day and came to believe her imagined or dreamed experience of meeting aliens was real.

A timeline of what Anjali has said about her drug use:
​Aug 10: On Reddit, Añjali says she experienced natural DMT release while in the hospital, and took synthetic mushrooms in late 2018. "I haven't ever had DMT, which I think I discussed a few times in different places. Would I today? Maybe as ayahuasca, but it would need to be with a shaman who knows the plant and the ritual. But I also don't feel that I need it today." She says her ego caused her to "overstate" her experience with psychedelics in the 2020 posts (see Timeline).

​Aug 18: On Reddit, Max says: "I cannot see how a, or which, drug could possibly produce an experience like hers, and there just isn’t any that I am aware of... I’ve ruled out drug influence (intentional ingestion or otherwise) from Añjali’s experience... she just simply doesn’t take any drugs except her prescription meds (which do not cause any sort of hallucinations)." Max does not specify if he's asked Añjali directly, or if she's told him directly, about any drug use during her initial holographic encounters and the tunnel adventure in 2018.

Aug 20: On Reddit: "I was not under the influence of psychedelics."

Aug 24: On Reddit, she says she has been assessed as mentally healthy. She does not respond to this question: "Did you tell the psychiatrist that you were in psychic communication with aliens and that they are sending you messages?"
After posting her story on Reddit in March 2021, many people (including myself) who thought she seemed to believe her own story questioned whether she had taken drugs that day. Anjali repeatedly pushed back against the idea that she had taken any mind-altering substances:

Nov 4: Anjali admits for the first time that she took "medical cannabis resin" before going to Wayne's house, and says it was "the only thing" in her system.

This admission came two weeks after "Wayne & Trisha" denied her access to their property, and was perhaps inspired by a fear they might come forward with their story - which they eventually did, revealing she had taken cannabis oil. That Anjali did not admit in March 2021 to being on highly potent Rick Simpson oil when she "met aliens" strongly implies she knew such an admission would destroy her credibility. What set her story apart, since she had no physical evidence whatsoever, was her professional background and alleged clear-headedness on the day and excellent recall afterwards.

Her repeated statements that she had not taken "psychedelics" seems to be an attempt to explain that the "medical cannabis" was for her physical ailments and did not affect her mind in any way. She also states it was the only thing in her system, but in a later interview will reveal she was taking a combination of several prescription medications. 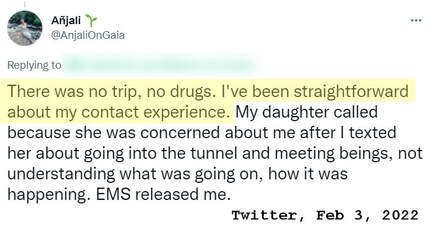 Anjali has also repeatedly mentioned her Rx card for medical cannabis, giving the impression that the cannabis she took that day was legally hers and was not psychoactive. In fact, it was not hers and it was extremely potent THC. 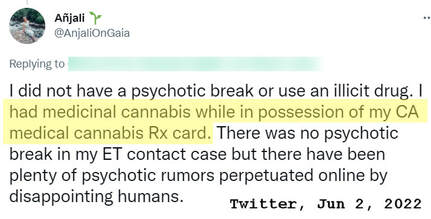 Mar 4, 2022: Anjali claims she has "stated all along" that she took medical cannabis on the day. In fact, she didn't mention the medical cannabis until Nov 4, eight months after she first posted her story on Reddit. This is called gaslighting: making you question whether your memory of her never mentioning cannabis before is correct.

Mar 13, 2022: In an interview with Steven Cambian, Anjali lists five medications she was prescribed at the time: Adderall, "heart medication", Famotidin, Cymbalta, Flexeril.

Mar 18, 2022: Anjali says she was "not inexperienced" with cannabis rosin (to justify why it did not affect her mentally), which she has erroneously been calling resin, but also seems to acknowledge that what Wayne gave her may have been something else (something stronger?). She implies the medical personnel who saw her thought she was completely unaffected by the drug, whereas Wayne said he talked to the sheriff about what he'd given her, and that this was the reason the medical personnel released her, knowing it was harmless.

She demonstrates the amount of Rick Simpson oil she took that day. 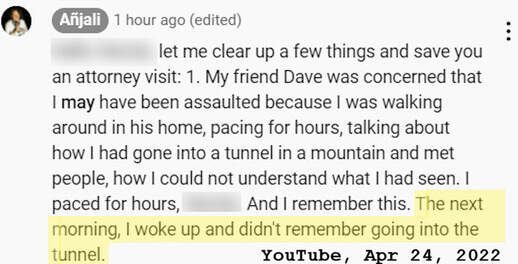 One final nail in the coffin regarding whether Anjali has truly been transparent and honest about her experience: in a now-deleted Reddit post, she wrote the following in August 2020 (7 months before coming out on Reddit) in order to explain her belief that one can meet entities on drugs, but that daily meditation is better: 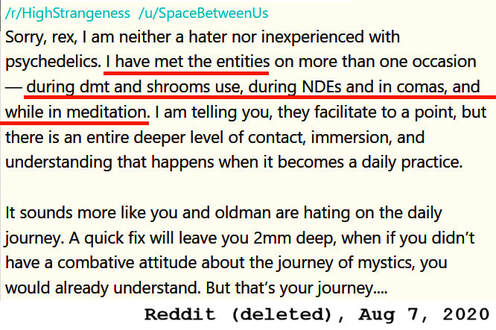 Notice what she doesn't list or even allude to?
So, back Aug 2020 it seems she didn't recall her 2017-18 experiences. At some point during the next 7 months she must've "remembered" them in order to write about them in Mar 2021.

The evidence shows Anjali's memories of her experience are extremely messed up. She refuses to acknowledge this, not even to the couple she genuinely harmed, let alone the people in whom she instilled a vain hope of irrefutable evidence of benevolent ET on Earth who just wanted to save us from ourselves. All because she got stoned.