Betty & Barney Hill
(or: How to prepare squash)

Driving through the White Mountains late at night, a couple sees a flying saucer. They arrive home with two hours of missing time. Under hypnosis it's revealed that during the missing time, they were taken aboard the craft by short grey aliens and experimented upon.

If you know anything about alien abductions, you know the Hills' story.
​
Or do you?

The Betty & Barney Hill pages on Three-Dollar Kit are divided into these sections:
I have written several Twitter threads on this case if you'd rather read in summary form:
NOTE: Listening to Pink Floyd while reading this Betty & Barney Hill story is the only way to make sense of it.

Stories that have been retold a thousand times can lose a vital feature: how the story unfolded at the time. Details that were added later become incorporated into the retelling as if they were known at the time. And that's a problem.

The Hills' problem is compounded by their hypnotherapy sessions, more than two years after the incident. When someone can show me that hypnotherapy produces (1) true recounts that are (2) demonstrably different from imagination, I will take Betty and Barney's "recovered memories" seriously.

Actually, I won't, because their recovered memories are basically Betty's dreams, which she had shared with Barney.

Anyway, let's look at how this story unfolded at the time.

Yes, of course there was a movie. Here's the plot:
​
Sep 19-20, 1961: New Hampshire couple Betty and Barney Hill arrive home just after 5 AM on 20th, later than expected, after driving home from a vacation in Canada. Along the way, they witnessed a strange light in the sky that seemed to follow them. Betty, who likes to retell the story of her sister seeing a UFO a few years prior, thinks it's a flying saucer. Barney, a WWII veteran, thinks it's an airplane or helicopter. Betty puts away the dress she was wearing without washing it.

Sep 20: Betty reports the strange light to the nearby Airforce Base. She says nothing about aliens.

Sep 21: Major Henderson calls her back (on two occasions) and takes Betty and Barney's report. They again say nothing about aliens. However, the call prompts Barney to suggest they go into different rooms and draw their recollections of what they saw. Note the following:

The earliest reports (Betty's letter to Keyhoe, and Webb, 1961) mention windows but not in a double row.

Fuller (1965, which is post-hypnotherapy) has Betty and later Barney "clearly" seeing "a double row of windows". Yet she drew no windows, and Barney drew a single row (with figures) the day after the encounter. 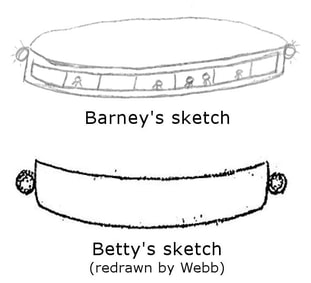 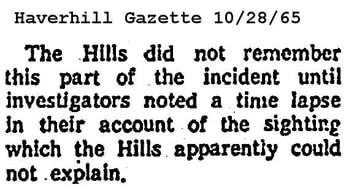 During the week, Betty picks up several books on UFOs, including The Flying Saucer Conspiracy (1955) from the library by ret. Major Donald E. Keyhoe, co-founder and head of NICAP.

Sep 26: Henderson's report deduces that the couple misindentifed Jupiter.
Betty writes to Keyhoe and now mentions Barney seeing aliens in the windows of the craft.
​
Sep 29 (approx): Betty has vivid dreams for about 5 nights: she sees men in the road, a bright orange object nearby, and with Barney is taken aboard to be examined in separate rooms.
​
She tells Barney about the dreams, but he's not too interested. However, the couple becomes more anxious about what happened to them as the months and years pass.

Oct 21: Walter Webb (astronomer) from NICAP interviews the Hills for six hours. Barney says he has a mental block preventing him recalling the full incident.

Nov 25: The couple is interviewed by two more NICAP members (Hohmann and Jackson) with ret. Major James MacDonald present - an old friend of the Hills and a UFO enthusiast. It is established they have 2 hours of missing time during the interval between the two times they heard "beeps". The Hills remember seeing a fiery orb on the ground and believe it was the moon setting, but the NICAP guys disagree. Barney calls Betty's dreams "nonsense". Hypnosis is suggested, but not performed.

Nov: Betty writes down her dreams from September, in which she and Barney are taken into the craft by short men with black hair and "Jimmy Durante" noses. They undergo separate medical examinations.​ 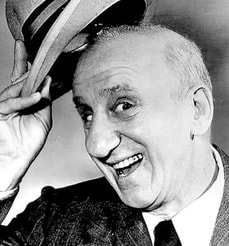 Jimmy Durante, 1964
The aliens Betty encounters are kind and considerate. One of them speaks "in a human voice, like somebody speaking English with difficulty" [Playboy, Jan 1978]. She talks to the examiner (who also speaks English, and doesn't know what years or vegetables are) and to the "leader", who gives her a souvenir book (yes, a book with a cover and pages inside... jeez) full of symbols. He pulls a roll-away star map down from the wall (later changed to a 3D map) but she doesn't understand it.

Betty's Superb Squash Serving Suggestions
She isn't allowed to keep the book because the "leader" has no authority apparently. The couple is escorted back to their car and watches the craft (an orb sitting on the ground) depart.

1962-63: The Hills speak a couple of times in public about the encounter, including at a UFO study group meeting in Quincy in 1962 (Manchester Union Leader, Oct 26, 1965). Barney returns to drinking, his ulcer worsens, he develops high blood pressure, and he gets a ring of warts around his genitals [note: this is before he "recalls" a cup was placed there during the abduction]. His psychiatrist refers the couple to Dr Benjamin Simon for hypnosis.

Apr 13, 1962: The Twilight Zone broadcasts an episode, "Hocus-Pocus and Frisby", in which a man is abducted by aliens.

​Jan 4 to Jun 6, 1964: Simon hypnotizes Barney and Betty, separately, several times each. This is the first time Barney has recalled the abduction part of the story.

Barney is frequently fearful under hypnosis and says he kept his eyes closed through much of the abduction. As for the initial sighting, he describes seeing aliens (using binoculars) through the long row of windows of the craft. One has a round face and reminds him of a red-headed Irishman, and another looks like a Nazi.

In light of that Outer Limits alien, note that Barney talks repeatedly about the aliens staring into his eyes and mesmerizing him to obey:
​
"Yes. They won’t talk to me. Only the eyes are talking to me. I don’t understand that. Oh, the eyes don’t have a body. They’re just eyes…”
"Oh, those eyes. They're there in my brain"
"I felt like the eyes had pushed into my eyes"
"All I see are these eyes"

​Betty is also often distressed under hypnosis. Her recollections match Barney's but differ a little from her dreams in terms of sequence of events and especially the description of the aliens. Betty sketches the star map she was shown: 7 or 8 dots connected by lines. (Amateur astronomer Majorie Fish in 1969 began work on the star map and identified the stars. After more data came out about distances between stars, she repudiated her conclusions.)

Betty now takes out of the closet the dress she wore that night and finds it covered in pink powder. She returns it to the closet for 40 years, taking it out on occasion to show visitors.

​Feb 22, 1964: Under hypnosis, Barney recalls skinny aliens with greyish skin and huge eyes. He sketches one - with a notably tiny nose. Betty never mentions Jimmy Durante again, and her future hypnosis sessions describe the same aliens as Barney. (At the time, no link was made between Barney's sketch and any TV aliens.)

​Simon relates that the couple have contrasting personalities: Betty is dominating and possessive, while Barney is passive, highly suggestible, and full of repressed anxieties and fears. He believes that as Betty related her dreams to Barney, his suggestible nature incorporated them as reality. Barney disagrees and now believes he was abducted.

Personally, and just roll with me here for a minute, I think Barney's fear of the "leader" stems from some traumatic wartime (or childhood) incident, perhaps relating to issues he had with a superior, which has fed into the UFO encounter. Being Black in the 1920s to 1950s wasn't exactly a cakewalk when it came to the authorities.

​Oct 1965: A front-page story in the Boston Traveler pushes the Hills into the spotlight.
​
1966: The Interrupted Journey by John G. Fuller is published about the incident.
​Betty, who saw Jupiter and later saw another light appear above it (the flying saucer) is asked to sketch the relative positions. She describes the appearance of the second light at exactly the location where the light from the observation tower on Cannon Mountain comes into view over a crest (the tower itself is invisible at night). 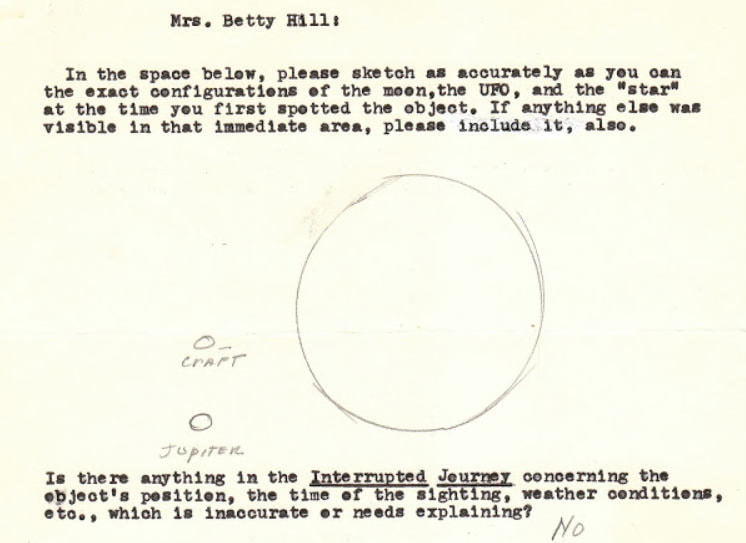 The Hills had a pretty nice vacation by all accounts, but they made one mistake on the way home: they misidentified an aircraft warning light atop the observation tower on Cannon Mountain and thought it was a flying saucer zipping around. In the following pages I'll give a detailed account that shows how this unfortunate slip-up happened, based on the work of Jim Macdonald, a local who actually drove the route at night to observe the light (did nobody at the time bother to do this?).

I also revved up my Google car and drove the route to observe the beacon, confirming Jim's account. I've included many screenshots and maps in my multi-part series, comparing the drive to Fuller's book and to even earlier reports from the Hills.

​At the close encounter south of Indian Head, the Hills are sleep-deprived, irritated, and frightened. They see an unidentified object - probably more than one - as in their stressed state they attempt to focus the binoculars on any light in the vicinity.

Later, they will report seeing a pancake-shaped craft with a double row of windows. It's possible the windows were already implanted in their memory from having earlier viewed the beacon from the base of the mountain (the closest they got to it), with its windows in the observation deck. The pylons reflecting the beacon's light may have seemed like "fins", and the aliens in the windows may have been the silhouettes of trees.

Barney's sketch (compare to the one above to confuse yourself), and two views of the observation tower.

These pages provide evidence for the following theory:
The Physical evidence page looks at the analysis of Betty's dress and star map, and radar reports.

Before we set out in our Google car to accompany the Hills on their mid-September journey, there's one more thing to keep in mind:

NICAP report on the Hills case, Webb 1961
Aside from any conclusions we might draw from this revelation, what makes it more interesting is that this paragraph vanished as thoroughly as Travis Walton's failed polygraph results when Webb submitted his revised Hills case report in 1965.
> Go to PART 1: Wish you were here, in which the Hills go on vacation.
Supplemental: Webb's Hills case reports from 1961, and from 1965 when he revised it to include the revelations from regressive hypnotherapy, but removed the paragraph about Betty hearing a radio show caller's UFO story (Betty and Barney: The Abduction Edition). Click to enlarge.
(c) Charlie Wiser 2021