Something glinting in the trees 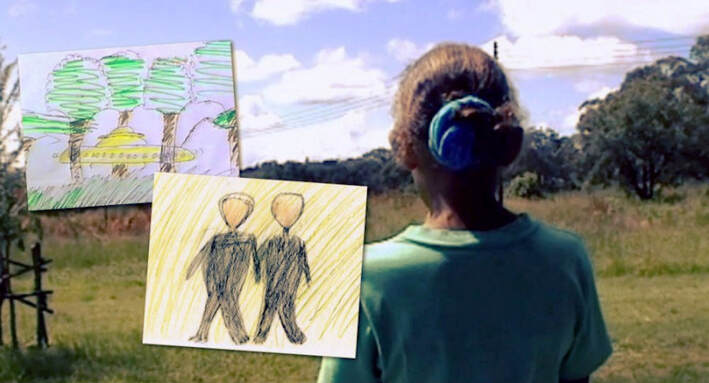 Sep 16, 1994, Ruwa, Zimbabwe
​
During morning recess at Ariel Primary School (a private school est. 1991), dozens of children witnessed a UFO landing about 100 meters from their playground. Two small beings with huge eyes emerged, dressed in black. They ran up and down in slow motion while the children watched in awe amid spreading panic. Captivating several children with their stare, the creatures transmitted telepathic messages about the environment. No adults were on the playground to witness the event. When told by teachers to draw what they had seen, the children all drew exactly the same thing. Harvard psychiatrist Dr John Mack interviewed a dozen of the children and declared they were not lying, and that what they had experienced was real.

This case is a favorite among many in Ufology and came into the spotlight in recent years because several witnesses, now adults, started speaking about the event and its effect on their lives ahead of the release of a new documentary.

What really happened at Ariel?

Who couldn't love this case? The multiple witnesses! The exotic locale! The cute children!

What a timeline of testimonies reveals is that the above description is not an accurate account of what happened. Initially, the children reported a fairly mundane sighting and drew differing pictures - some of which were clearly based on their interpretations of UFOs and aliens from popular culture.

Over the days and weeks that followed, the stories changed. Details were added that made the visitation more alien. Other details were forgotten, and a cohesive "averaged" narrative emerged that was trotted out for subsequent investigators and reporters.

Dr John Mack arrived in Africa 2.5 months later and interviewed the children. He "uncovered" memories of telepathic messages that had never been mentioned before. Snippets of these interviews have appeared on the internet for the last several years, edited into small chunks that can give a misleading impression of how he questioned the children.

Below is a timeline of events to orientate yourself. Follow the navigation links to read the children's words in the order in which they were given, including the reconstructed (to the best of my ability) interviews with Dr Mack. By reading these testimonies in order, you can see how the tale - as always - grew taller in the telling.

In no case am I suggesting the witnesses are lying, either the children in 1994 or their adult selves. The adults are recalling events they believed at the time to be true. The children were unwittingly copying each other in the context of a UFO narrative that appeared even before the sighting began, and was subsequently consolidated in the school environment.

Timeline of the Ariel School event

Map of the sighting

This is my best guess based on the descriptions given, the map Hind printed in her newsletter in 1995, and her 1996 description from her book UFOs Over Africa, where she says the distance was 200 meters (p. 222). The satellite image is recent and the vegetation would have been different in 1994.

The UFO was seen in tall grassland among trees. A cross-country track, used by students, ran through it. The students were not allowed to venture into this bush past the playground, which was bordered by logs. The closest the children could have been to the clump of trees in this 2005 satellite photo is about 220 meters (243 yards). 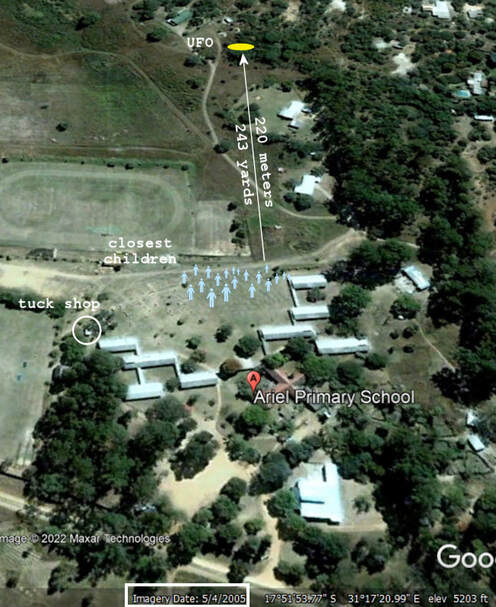 (Sources are listed at the bottom of each page on which they are cited.)
NEXT: FIRST ON THE SCENE >
HOME
(c) Charlie Wiser 2022