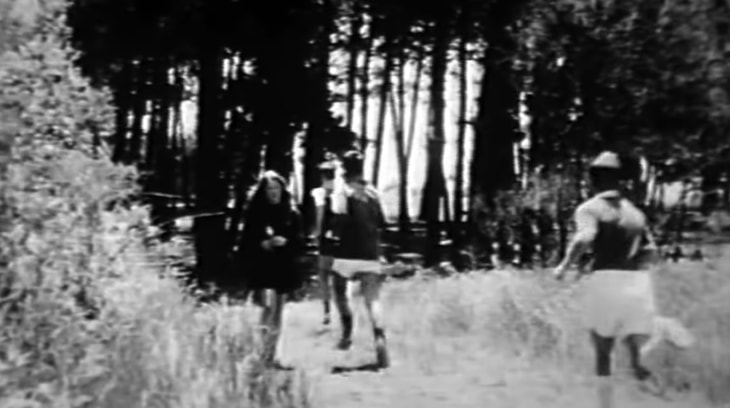 The Grange near Westall High School, where a UFO was said to land in 1966 (Source: late '60s student film)

Did the authorities conspire to fool hundreds of Australian schoolchildren into thinking they’d seen flying saucers, all to avoid a PR disaster when a high-altitude scientific balloon almost sent its 300kg payload with secret instrumentation crashing into a schoolyard during recess?

For those with short attention spans, click the flying saucer for a summary of these pages on Westall.

On Wednesday April 6, 1966 (two days before Good Friday and the Easter break), at morning recess in a semi-rural high school* in south-eastern Australia, hundreds of schoolchildren and at least one teacher watched one, two, or three UFOs flying overhead. One disappeared behind trees into an area known as the Grange. Some children climbed the fence and raced across paddocks only to find the flying saucer had gone - it had shot up into the sky where it played cat-and-mouse with several light aircraft, displaying physics-defying maneuvers before vanishing.

Circles of flattened grass were found at the Grange and nearby locations. Military personnel were seen in the area. The headmaster told the children not to speak to the media or talk about flying saucers. Some witnesses were warned by men in suits, and the teacher's job was threatened.

The cover-up has confirmed in the minds of many that this was a genuine extra-terrestrial event or secret technology that was unknown at the time and remains so.

The problem with witness testimonies 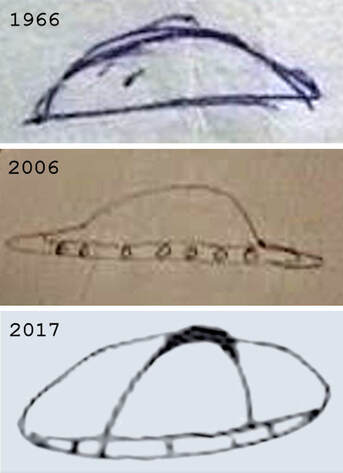 Joy' s drawings of what she saw
Throughout these pages I've highlighted only a few of the many inconsistencies between witness accounts and within individual witness accounts over the years, when the contradictions are important. This is not intended as an attack on the witnesses' integrity. Many have themselves admitted to incomplete or uncertain memories. My aim is not to discredit witnesses or change their minds. My aim is to present and test a hypothesis that may explain what happened, and why.

The story, a "cold case", came into the public eye after researcher Shane Ryan created a Yahoo group (now a Facebook group) in 2005 to bring witnesses together, followed in 2010 by a documentary, Westall '66 (dir. Rosie Jones), featuring interviews as well as information that indicated some sort of cover-up due to there being no official documents about the event.

Analysis of what really happened at Westall can never progress as long as all adult witness testimonies are accepted indiscriminately. Contradictions mean that some testimonies simply do not represent reality, no matter how fiercely a witness may hold on to their version of events. While for the most part we only have each witness's decades-old memories, there are four witness testimonies from close to the time of the event:
Purely as an example of how memories change, look at how Joy's drawings of the UFO evolved over the years. Aside from the visual differences, in 1966 she described seeing two UFOs: "circular, round on top, flat on bottom", which matches all her drawings. But in 2017 she drew a group of three UFOs (one shown here), and in 2022 she described them as "a cup upside-down on a saucer", which only matches the middle drawing.

Looking at Joy's drawings and testimony, or comparing hers with those of other witnesses, we have so many variations and contradictions that at least some of this information must be wrong. The simplest and most blatant of all is that Greenwood and some witnesses say a girl interrupted his science class yelling about flying saucers, but other witnesses say it was a boy. We also have some witnesses insisting a UFO landed on the school oval (which was, at the time, full of children in a PE class), while others adamantly deny it.

Andrew Greenwood's memories of what he witnessed also changed over the course of 50 years, culminating in him speaking on camera for the first time to director James Fox: "It was silver, it could hover, it could move slowly, it could move very rapidly. Eventually it moved away to the other side of the oval and down behind some pine trees." [The Phenomenon, 2020; probably filmed in 2017] Yet in 1966 the object he witnessed was never stationary (i.e. did not hover), and he never saw it go behind the trees. Both these observations are other witness accounts that he's absorbed into his own. And, via Shane Ryan: "he thinks his original description at the time is the best guide to what he saw." [Westall Yahoo, Sep 3, 2005]

The problem is that we don't always know which information is wrong. What we can safely say is that memories do not improve with time. It makes sense to place more weight on the earlier testimonies.

The fallibility of memory is not the only barrier to piecing the story back together. Eyewitness testimony is notoriously unreliable, and one reason is that our perceptions are colored by our assumptions. For example, Greenwood ascribes motivations to the UFO and the planes overhead by saying they were playing a cat-and- mouse game. Paul S says of his sighting: "It was as if [the object] had been observing what was going on, and because I’d spotted it, it started changing." If a witness assumes something is acting with intent, it may appear to act with intent.

A experiencer of an unusual event is likely to say: "I know what I saw!" Generally, the evidence shows this is not the case (see colored box below). When testing any hypothesis about Westall, some testimonies will have to be discarded if the truth is ever to emerge. It is logically impossible to reconcile them all. We must accept that perception is inaccurate and colored by our assumptions, and that memories change. When a hypothesis is found that's a good fit for most of the evidence, it is therefore invalid to protest that it doesn't account for this or that particular account (especially when those accounts are recent).

Once we’ve accepted that eyewitness accounts are inaccurate and memories change, we can re-evaluate Keith Basterfield’s Hibal hypothesis (Hibal = high altitude balloon) [Basterfield, 2013]. I’ve assembled his research and added new information that’s come to light since. I’ve addressed the rebuttals and theorized plausible possibilities for each stage of the Westall event.

I'm calling this synthesis of ideas the PR Disaster hypothesis, for reasons that will become clear. (PR = public relations.) It explains why the authorities reacted as they did - arriving quickly on the scene, cordoning off the area, shutting down talk, and possibly threatening some adult witnesses. This heavy-handed, mysterious approach left the witnesses angry and confused. They knew they’d seen something - something that apparently needed to be covered up. Many have concluded that what they witnessed was advanced physics-defying technology, perhaps extra-terrestrial (collectively called "flying saucers" on these pages).

I will also be highlighting the testimonies of witnesses who believe what they saw was not unusual. They feel their voices have been shouted down or ignored, with filmmakers and reporters uninterested in anyone who doesn’t think they saw flying saucers.

Explore each step with the evidence by clicking the links at the top of every page. It will make more sense if you do this in the correct order. Below is a summary of the PR Disaster hypothesis, which is expanded on the following pages. The Quick Read presents the main points without the supporting evidence.

Summary of the PR Disaster Hypothesis

This work is based on the research of several people, particularly the first three below. I list them all here rather than always identifying them along the way for their contributions. Thank you in particular to those generous and enthusiastic researchers who helped me with documents, links, or just talking things through.
​
Westall witnesses are mostly referred to by first name only. Sources are linked on each page.

Is there a photo of the Westall UFO?

The "Balwyn bell" photo by James Johnson Kibel was taken almost 16km (10 mi) to the northeast of Westall, allegedly four days before the Westall sighting although it didn't surface until afterwards. While some investigators and witnesses have attempted to link it to the Westall UFO, the descriptions and drawings from the witnesses bear no resemblance to the bell.

Keith Basterfield and Paul Dean give a balanced investigation of the photograph here. It also looks exactly like a pram hubcab (or similar piece of junk) chucked in the air.

"The photo looks nothing like what was seen that day." [Westall witness Phyll T, Apr 16, 2021, Westall Facebook] 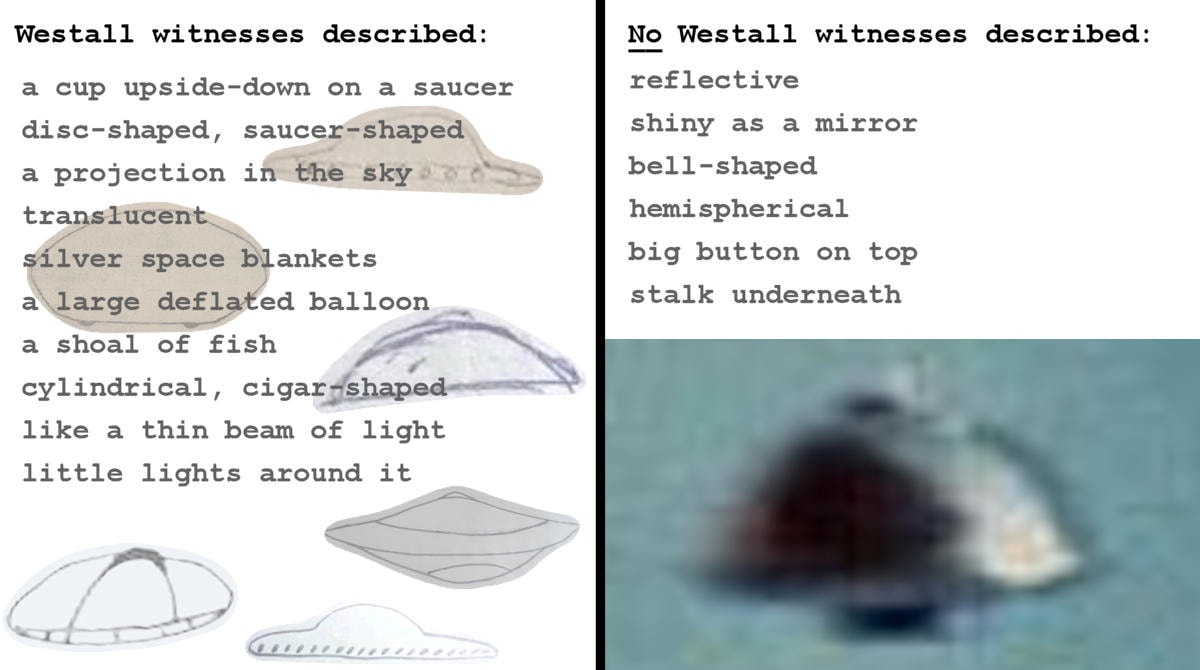