"I didn’t see one myself"

The circles are a problem.

Many, many circles have been reported at Westall High School, the Grange, and the surrounding paddocks in the wake of the "UFO" sighting.

A circle is not a landing site

​​​Shane Ryan has collected reports of circle locations according to the witnesses' best memories. He acknowledges - in the case of circles, anyway - that memories are faulty: "In the course of my research I have narrowed the circle locations to between 3 and 5!" This is despite the fact that as early as 2007, UFO researcher George Simpson listed ten circle locations. [Westall Yahoo, 2007] Shane has to discard some testimonies to arrive at only 3 to 5.

Yet the only landing site most witnesses agree on is in the Grange - and nobody actually saw anything landed there. They only saw the UFO descend out of view behind the pines and apparently rise up again. (I am discounting the two witnesses who claim to have seen UFOs on the ground at the Grange and over the west fence of the school - these are later embellishments without corroboration, and the accounts do not tie in with the sequence of events.)

Circles were also found in the paddocks between the school's back fence and the border of the Grange (300m away). In some cases witnesses have very clear memories of how they found circles here: which gate they went through, which dirt track they rode down, which fence they climbed over... Yet despite 200 or more witnesses on the school oval, many of them hanging over the fence to watch the UFO(s) drift over those very paddocks, there are no reports of the UFO hopping all over the paddocks making these circles before going behind the pines.

The same goes for any circles on the school grounds (the oval). There were at least two classes outside playing sport, which would generate many reports of seeing a UFO land there. I've no doubt circles were seen in all these places, but clearly they were not created by a flying saucer (or a balloon).

In the 1960s, there would be some children who knew that UFOs made "nests" in the grass. They knew what to look for. Any wild paddock is going to have natural variations in the vegetation (including color, height of grass, direction of stalks, and damage to stalks), and sometimes those irregularities will form in a circle. You'd probably never notice if you weren't looking for them - but in this case, dozens of eager children were looking for them.

Andrew Greenwood and English master Claude Miller (who came outside after the fun was over) walked to the Grange and found nothing: "There were [reports] of course from the several groups of the children later on, that they’d seen one of these typical nests, but I didn’t see one myself. It would be the perfect area to see one in - lots of long grass. But I didn’t see one myself, although I looked around for quite a while." [McDonald, 1967]

Greenwood was at the famed site, but no child pointed out any circles to him. He didn't even hear about them until later on, despite the children knowing he was the teacher who had witnessed the flying saucers alongside them.

The earliest reports of circles come from: ​None of these reports indicate perfect circles or neatly flattened, twisted, spiraled, corded, swirled (etc.) or burned grass.

So what made the circles?

​Calling them circles is obviously a stretch, as can be seen in the photos. So, what made the areas of flattened grass? Some ideas:

How much did Aussie kids in the 1960s know about flying saucers? 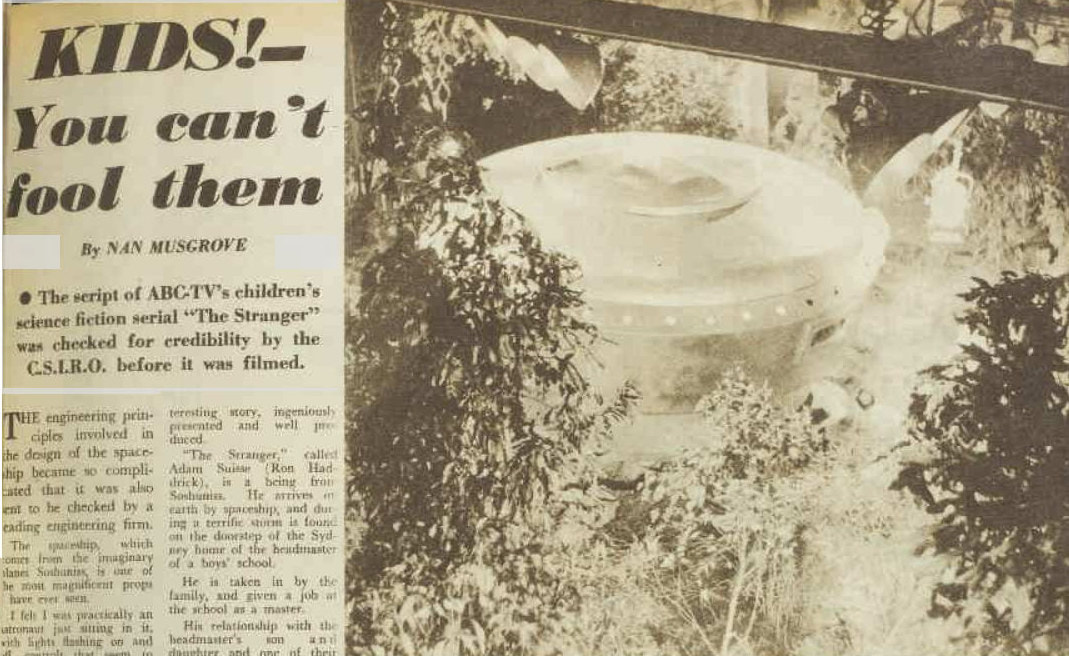 Three high school students become suspicious of a new teacher "Adam", and eventually learn he's an alien on the search for a new home, as his world is dying.

The kids come upon his flying saucer in a forest setting, and one of them even takes a ride back to Adam's home planet.

"Did it shape the witnesses' response... to what was seen - how they interpreted what they saw, how they described it? Perhaps..." [Shane Ryan, Westall Facebook, Feb 16, 2018] While Shane Ryan then dismisses the similarities as irrelevant, David Halperin believes the TV show may have set the Westall students' expectations and affected their interpretations. [Halperin, 2018]

Episode 1 on YouTube.
Next up: If the UFO's incredible capabilities have been misremembered or embellished, the circles don't represent landing sites, and the cover-up was typical bureaucratic ass-covering, what's left of this story?