Not a Weather Balloon

"A silvery thing... it had little lights around the edges." [7NEWS Spotlight feat. Ross Coulthart, 2021]​ Click image for a 2-min video.

The table below lists the differences between a weather balloon and Hibal system. In relation to the Westall event, it's important to understand that an unpunctured Hibal falling through the lower atmosphere deflates (due to air pressure) and looks rather like a translucent pancake or jellyfish (see image at top of page, click for short video). Also remember there are additional components: the payload, its parachute, the chase plane, and the ground crew. 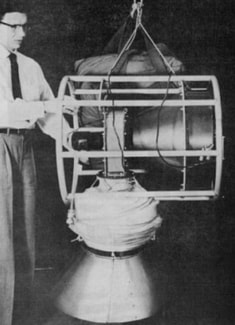 Payload gondola for Project Ashcan (precursor to HIBAL), 1958, Mildura.
Scientific balloons are still in wide use, but I'll be describing the 1960s program specifically. Flights were scheduled to last up to 8 hours. The Bureau of Meteorology tracked wind conditions to help predict the approximate flight path and landing site. "It is not unusual for the wind to be in different directions at different heights." [Thorn, 2021, p.13]

At the end of the mission, if all went according to plan, the payload was "cut down" by an explosive squib, triggered either by the closing down of the instrumentation or by radio command. As the payload broke free, it ripped the balloon open to release the helium, causing the balloon to collapse and quickly fall. The payload then took about an hour to descend to the ground on a 12m parachute. (The parachute was red-and-white-striped in the images I've found.)

A light aircraft, the chase plane, would fly ahead to the anticipated landing site, wait on the ground until the end of the flight, and then take off with an eagle-eyed observer on board to spot the descending payload. The parachute became visible once it had fallen to an altitude of 2.4-1.5km (8000-5000ft). The chase plane then relayed the landing site to a ground crew in long-wheel-base Land Rovers, and they retrieved the payload (after disarming the explosives), parachute, and balloon.

​On the ground, winds could cause the parachute to drag the gondola some distance. Battery malfunctions could cause ground fires. [Thorn, 2021, p.20] 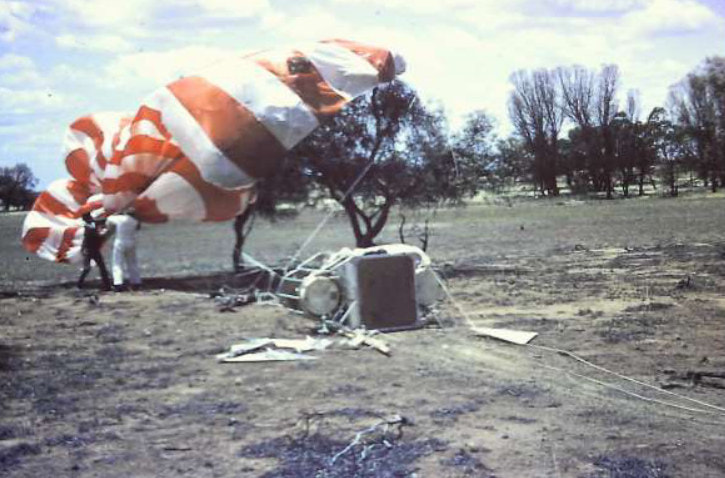 Strong winds have dragged the payload until the parachute became entangled in a tree. Burnt patch in the foreground is due to a battery fire. [Photo from Thorn, 2021]

Some very short videos from Stratocat showing a deflating Hibal in the sky, taken from several decades of flights. Click each image to watch.

How far could a Hibal balloon travel?

There are numerous accounts of Hibal traveling hundreds of kilometers and staying aloft longer than the anticipated 4 to 8 hours. The map below displays information gleaned from Steven Thorn's memoir (2021; he worked on HIBAL at Mildura from 1963). 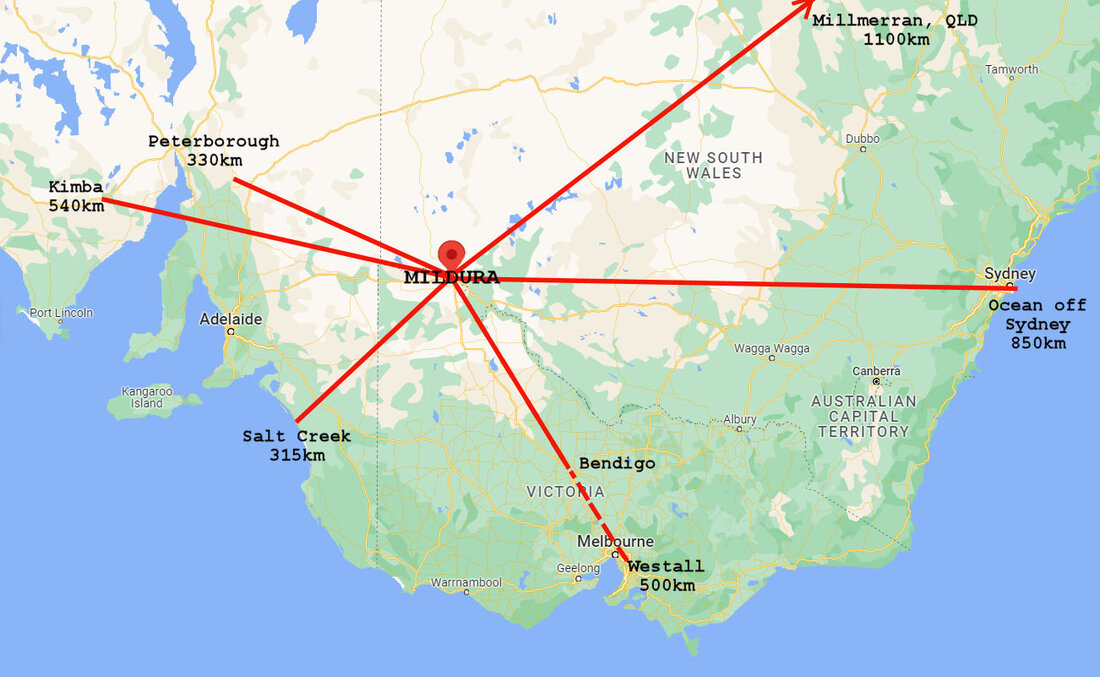 HIBAL landing sites in the 1960s, mostly from Steven Thorn's memoir Project HIBAL (2021)
The map also includes a Mildura-launched Hibal balloon that failed to self-destruct and continued drifting for days as far as Millmerran, QLD (1100km away) in late August, 1969. "The balloon was equipped with a radar deflector and systems package which were designed to be jettisoned after the tests were completed, at the same time the balloon should have self-destructed... It is probable that this balloon failed to self destruct and was then sighted visually in South East Queensland as it continued its easterly drift." [NAA: A703, 580/1/1 PART 12, p.96, see also p.99]

Was Hibal seen near Westall on Apr 6?

On the Westall Flying Saucer Incident Facebook Group in November 2017, Shane Ryan published the account of a UFO sighting relayed to him by a witness who was 7 years old at the time. On the morning of Wednesday April 6, 1966, 38km (24mi) north of Westall at Smiths Gully, the boy saw an object flying low over tree tops about 100 yards from where he stood.

As an adult he described it as: "Two saucers joined together with a band in the middle that revolved and was illuminated; hose like vacuum cleaner hose trailed behind it.” He is convinced it was not any kind of balloon. [Westall Facebook Group, Nov 4, 2017]

Comparing his illustration (extracted below) to a Hibal (being filled in this photo - remember that a descending balloon that "failed to self-destruct" would have a very different shape), note the band across the middle and the trailing hose. The helium hose would remain attached to the balloon during flight. (Balloons also had an exhaust duct to siphon off excess helium and prevent bursting at high altitude. [Thorn, 2021, p.39]) The edges of the balloon, as can be seen in the video at the top of this page, can look like a band of flickering lights.

Would a 7-year-old boy know what a deflating high-altitude balloon looked like? It seems almost certain that what he saw was a runaway Hibal - on the very same morning and only 38km from Westall High School.​ 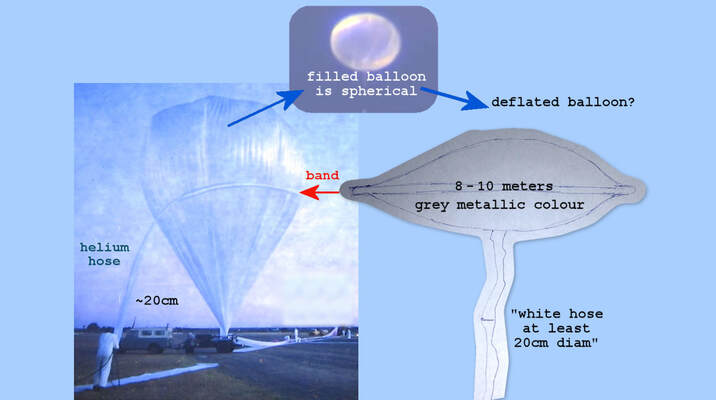 Similarities between Hibal and Smiths Gully sighting on the morning of the Westall event, 38km away
When the Smiths Gully drawing was posted on Facebook, Westall witness Erika H commented: "Very similar to what we saw at Westall" [Westall Facebook, Nov 2017]. Phyll T commented: "Wow Shane.....so similar.....& so vividly remembered after so many years have passed." She later drew her impression of the Westall UFO, which looks similar to the bulges and folds of a deflated balloon: 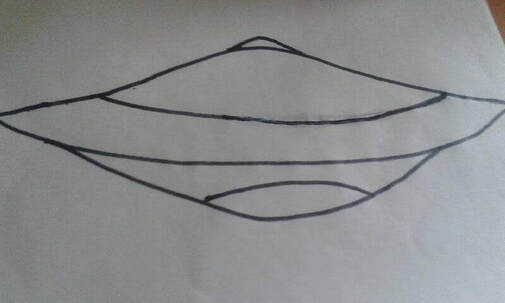 Phyll's drawing of the Westall UFO (Westall Facebook Group, 2018)
Tanya described the UFO like this: "it appeared to be metallic, it was silver in colour, and it seemed to have two parts (like it was two-storied), with a flat saucer-like bottom, on top of which was something like a dome." [via Shane Ryan, Westall Facebook Group, Nov 23, 2021] 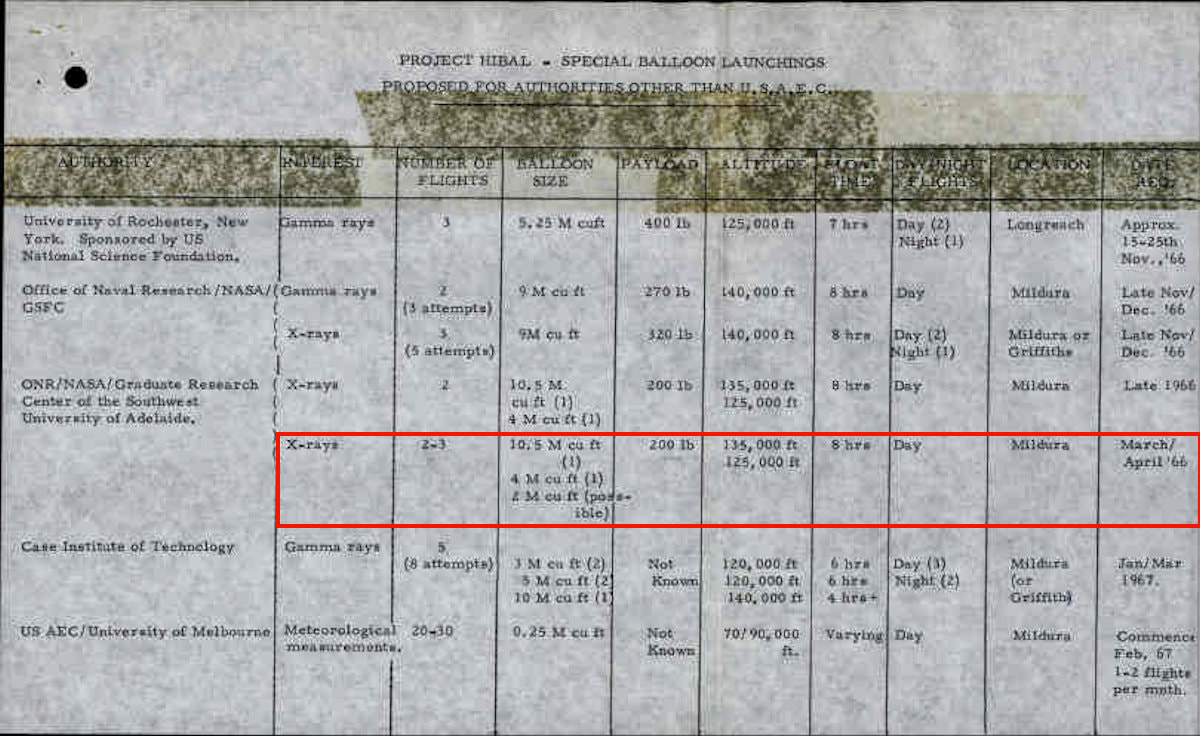 HIBAL Special Launchings proposed schedule, including for NASA in March/April 1966. Source: NAA: A1838, 694/7/23 part 2, p.81
Whatever else was on board the gondola of the April 5 flight, it was at least a partly successful mission as this data table reveals: 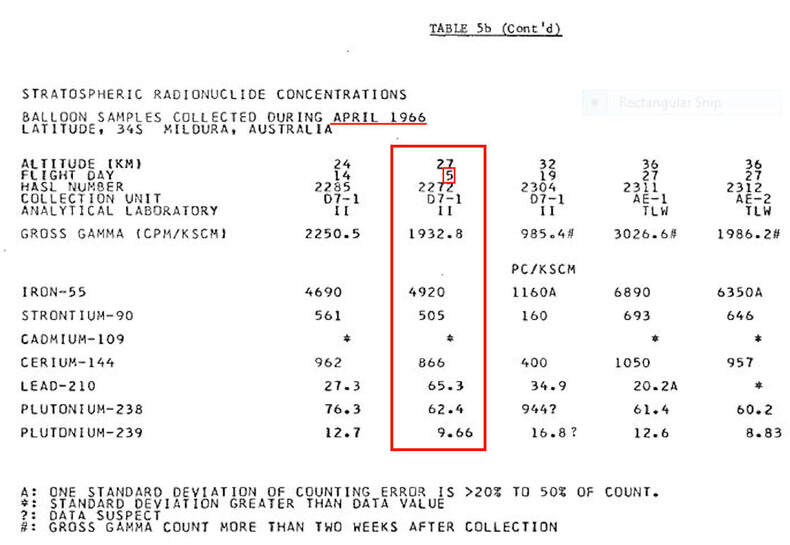 Part of the data collected from the April 5, 1966, HIBAL flight. Source: Health & Safety Laboratory (1968), US Atomic Energy Commission, p. 318.
Next up: An account of what was seen at Westall High School on Apr 6, 2021, focusing on early witness reports, and a re-examination of these accounts in light of what we know about Project HIBAL.