"A message of caution and encouragement"

The beings communicate with Anjali via conscious communication. She likens her interpretation of their message to a disorganized pile of Lego bricks, but apparently it's the best she and the beings can do.

The question, then, is:

Paraphrased from Anjali's Reddit post, July 24, 2021: Guidance to Grow in Conscious Connection on the path of Transcendence into the 4th density.
There doesn't seem to be a mystery here - nothing to remember or understand, since the higher beings have laid it all out. All you need to do is believe them.

An act of faith.

More recently Anjali stated: "No one transcends until the cycle of birth/rebirth is ended, it seems." [Twitter, Jan 19, 2022] So transcendence now happens after the apocalypse and separation of wheat and chaff. However, this is contradicted by her Oct 2022 interview (below) where the transcended are taken off-world before the apocalypse.

Note: In Anjali's first Reddit post, she described the messages her lavender being gave her three years earlier. Lavvy emphasized the divisiveness of human language. In order to urgently bring about world peace ("essential for our continued existence") so that more humans would be able to transcend, we needed to focus "on changing our communication method and language use to speak to others as he was speaking to me" - that is, to consciously communicate with each other. Lavvy told her "humanity's survival actually depends on our success in evolving our communication method... and we essentially better get to work on this." Anjali has never provided instructions on how to achieve this and did not mention it at the press conference in August (or since).

Since Anjali announced the expedition to Wayne's mountain "postponed", in early Nov 2021 (in fact "Wayne" definitively denied her access to his property in October), her focus has shifted to spouting New Age platitudes and predicting the end of the world in a few years. This is mostly on Twitter, since she's done very few interviews and has vanished from Reddit.

Despite the sun due to cleanse the Earth in 2027, the entire urgent imperative to evolve and transcend by learning conscious communication with other humans has fallen by the wayside. Anjali is dipping her toe into reinterpreting Abrahamic religions, complete with a new profile image, and alluded to forthcoming secrets that the Beings will no doubt be sharing in the coming year: 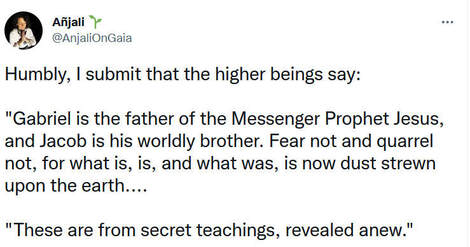 Anjali's weird Christmas message, Dec 24, 2021
Despite her past mouthpiece duties being translated by herself into tweets, she now quotes the Beings directly in their oddly archaic phrasing. For some reason they were unable to talk in human words until now.

And never forget: the material world is illusory.

And! There are humans already on a planet in Orion, where the non-transcended third density chaff will respawn after the separation. [Twitter, Feb 21, 2022] 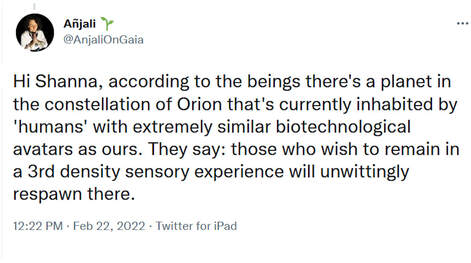 Apocalyptic stuff "from the beings", from Anjali's October 2022 interview by Alan Steinfeld and tweets during the same month:

As history has tragically shown, when devoted, hopeful, vulnerable people think they're special and that they're going to be saved, and then rescue does not arrive, it can lead to tragedy.

Anjali's describes her apocalypse as a solar flare that causes worldwide blackouts, massive floods that wipe the earth clean, and then an Ice Age. But all this is preceded by:
And that's the problem. Because if people are hoping to be taken offworld by their ET family before the main event, these minor (by comparison) preceding events will be seen as signs that rescue is imminent.

As rational non-delusional people know, this rescue will never come.

What will Anjali's panicking acolytes do, to ensure they leave the planet in time?

Marshall Applewhite and Bonnie Nettles' core teaching sounds an awful lot like Anjali's: you can transform yourself into an immortal extraterrestrial being (Anjali's becoming one with the Source) by rejecting your human nature, and you will ascend to heaven (transcendence), referred to as the "Next Level" or "The Evolutionary Level Above Human" (fourth density and beyond). While they initially believed their bodies would be taken to heaven aboard a UFO, after Nettles' death in 1985 this was changed to only their consciousnesses need to be saved, with new bodies available after death.

Anjali consistently devalues biotechnology (the physical body), perhaps because she's having so much trouble with her own. She's never described what fourth density will look like, except that third-density humans can't survive on fourth-density Earth. She's also specified that her own elevated consciousness from Orion required her embryonic biotechnology to be genetically tinkered with.

So, clearly some sort of physical change to our biotechnology will be necessary. And given the higher density beings are made of light, it's not a stretch to conclude that painful debilitating degenerative afflictions and diseases will be alleviated when one transcends to fourth density.

If the physical body is merely biotechnology to house a consciousness, why not dispose of it and get a better, ET-engineered body for fourth density? And if ETs don't show up to collect the awakened among us, will the awakened take matters into their own hands to ensure their consciousnesses escape the apocalypse and get fourth density biotechnology to proceed into the new world?
HOME
(c) Charlie Wiser 2021-22