Part 1: Wish You Were Here 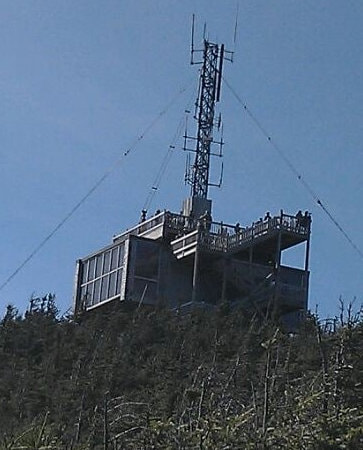 How do we know this?
​The theory that the Hills were seeing the beacon was put forward by Jim Macdonald, writer, and a local man who replicated the drive south along Route 3 in 2007 and wrote about it on the Making Light forum. Now we have the benefit of Google Maps, and I've used screenshots to map the journey. Excerpts and information from Jim's posts are designated -Jim.

What do you want from me?

What you want from me is sources! For this comparison I'm using these sources, placing more emphasis on the earlier ones (especially pre-hypnotherapy): ​
NOTE: The Fuller and Marden books mix the Hill's "recovered memories" in with the original reports without always indicating when the writer is doing this. You will see that most of the object's weird behavior comes from these later embellishments, and wasn't in the letter to Keyhoe or in Webb's extensive first interview.

Barney expected the 178-mile trip from Colebrook, NH (just south of the Canadian border) through the White Mountains to Portsmouth, to take 4.5 to 5 hours, which would require an average speed of 35-40 mph. The trip apparently took 7 hours, which led them to believe they had two hours of "missing time". Hypnotic regression later inserted an alien abduction experience into this period.

In the following account, you'll see the Hills stopped many times along the way to observe the object that they felt was following them. This is the first of several reasons that the "missing time" was nothing of the sort - I'll cover this as we go along, and add it all up at the end. Because basic arithmetic really is louder than words.

In Fuller's book there are only two time checks given: "The clock over the restroom in the Colebrook restaurant read 10:05 when they left that night." Note, this was not a watch check and it was not reported except under hypnotic regression - nevertheless, it's the only starting point we have so I'll use it. They arrived home shortly after 5 AM by the kitchen clock.

The only mention of checking watches on the drive home fails: Betty "could not read the dial very plainly in the dashboard light, and never did get an accurate reading." Their watches were stopped when they got home, which was no doubt because they forgot to wind them on their long and interesting journey.

Barney worked night shifts at the Boston post office, 60 miles each way. When the Hills and their dog Delsey set out at 7:30 AM on Sunday, Sep 17th*, for their 1200-mile round-trip, this is the time of day Barney would usually be thinking about bed. His sleep cycle is disrupted and this vacation is going to put him in overdrive...

*Fuller has them setting out on 16th

Over the next two-and-a-half days this was pretty much a non-stop drive-all-day vacation: 500 miles to Niagara Falls, and then 400 miles to Montreal (via Toronto and Thousand Islands). They spent the night of the 18th in a motel near Thousand Islands, "approximately 112 miles from Montreal" according to Barney [Marden].

The following account of the Hills' trip home through Canada is taken from Marden (p.91-6), and I'm including this summary to show that they were up and driving continuously from the morning of the 19th, with no stops at all except for food.

On the morning of the 19th they drove the two hours from Thousand Islands to Montreal, where they got lost twice in the downtown area during that afternoon. It was rush-hour and they didn't stop to sightsee, instead heading out of the city to find a motel. At 5:30PM they stopped at a country roadside stand for food and coffee, and they stopped again in a Coaticook restaurant. They apparently ended up on the wrong road heading for the border and crossed at Hereford (15 minutes from Colebrook) instead of Norton as intended.

After hearing of a hurricane approaching New Hampshire, they decided to push on through the night to get home. Here's their approximate route for the vacation:

The Hills' (approx.) vacation route. They drove from Portsmouth to Niagara Falls, then came home via Toronto and Montreal. They first saw the "object" about an hour south of Colebrook.
Barney, "an inveterate early-riser", had probably been up for 15 hours by the time they finished their hamburger and chocolate cake and left Colebrook at 10:05PM that evening (according to Barney recalling the restaurant clock under hypnosis), and he's already driven 270 miles and gotten lost three times. He's going to be awake (more or less) and driving for another 7 hours.

Let's follow the Hills as they head south along Route 3 toward Franconia Notch "never more than 30 mph" [Webb]. The two-lane blacktop highway is deserted, with no streetlighting.

Shine on (you crazy diamond)

​Jim tells us the Cannon Mountain Observation Tower beacon ("the beacon") first becomes visible as you crest the shoulder of Mount Prospect, where the John Weeks House stands. This is 38 miles, or about 75 minutes at Barney's stated speed, after leaving the Colebrook restaurant, so the time is 11:20PM.

For the other roads [i.e. not four-lane highways] Barney liked to drive between 50 and 55[mph], even if this should be a shade above the limit. -Fuller

Jim, who drove the route, does not buy speeds of 50-55 mph on those roads. This is not a modern highway, it's a "black tarvia [asphalt] two-lane road" [Fuller].

Here's where the beacon is first seen (along with the next 28 miles of their journey to come):​ 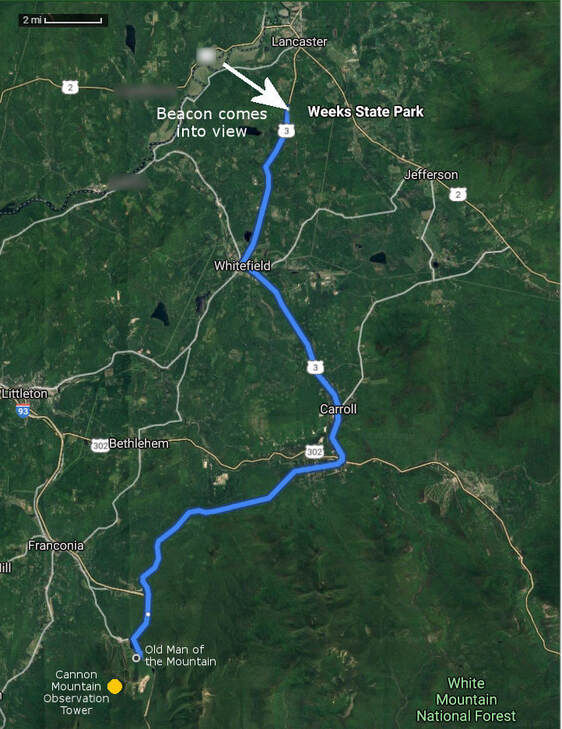 Location of Mount Prospect, where the beacon first comes into view 2.4 miles south of Lancaster.
I got in my Google car and drove over Mount Prospect: 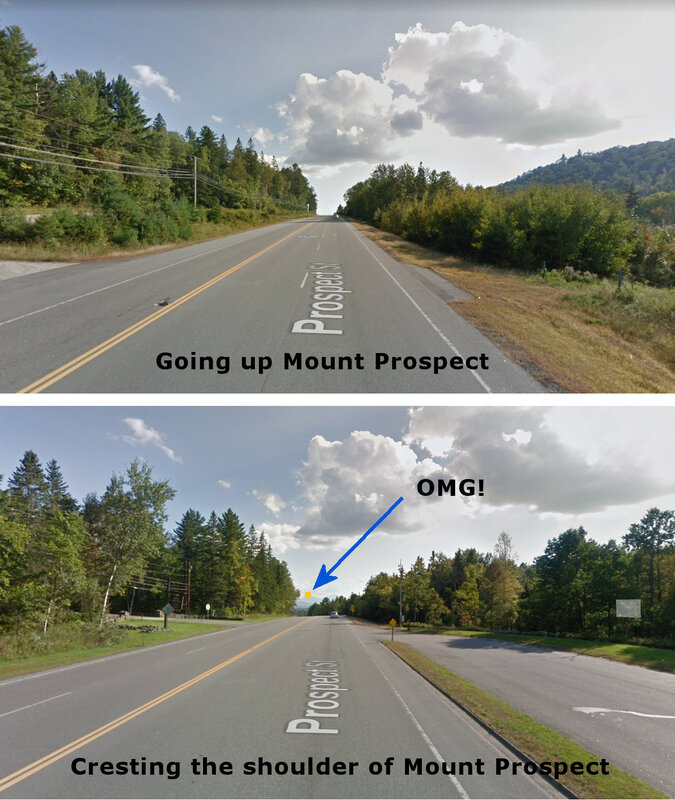 Cannon Mountain comes into view, with orange dot to simulate the beacon.
The beacon is dead ahead, 21.5 miles away (28.5 miles by road). The beacon, the road, and (setting) Jupiter are all on the same SW bearing. Since the Hills are heading right for that beacon, yeah, it's getting bigger and brighter.

The couple observes that the light (which I'll call the object when it relates to their observations) was "falling up" [Webb]. Jim explains:

Immediately after cresting the shoulder of the mountain, Route 3 plunges down a 9% grade for the next half mile. The road is pointed directly at Cannon Mountain at this time. Subjectively, at night, I can report of my own direct observation, the light appears to head rapidly straight up. -Jim

As they continue south:

They drove on, glancing at the bright object frequently, finding it difficult to tell if the light itself were moving or if the movement of the car were making it seem to move.  The object would disappear behind trees, or a mountain top, then reappear again as the obstruction was cleared. ​-Fuller

I've underlined a rare example of awareness there, which goes by the wayside once Betty decides it's a flying saucer chasing them.

​In a moving car, at night, in the mountains, the illusion that the car is stationary while the world is moving outside is strong. And the light on Cannon does appear to move against the star field... Subjectively, driving on that road at night, the light does appear to move up and down, to the right and left of the road, appearing and disappearing between trees and mountains. Even if you know what it is, it’s weird to watch. It vanishes over here, it reappears over there … spooky. -Jim
> Go to PART 2: Meddle, in which minds are meddled with.
(c) Charlie Wiser 2021