Is there anybody out there?

In their interview with Webb, the Hills never mention the beacon on Cannon Mountain. As you read on, every time you hear them describing what they saw, ask yourself this question:

If the object the Hills saw was a flying saucer, where was the light on Cannon Mountain during this drive?

Point me at the sky

About 6 miles south of Mount Prospect (where the Hills observed their "falling up" star) they stop somewhere north of Whitefield to let the dog out. Kathleen Marden omits all these early stops because it messes with her calculations of missing time, but the Hills even told the media (after the story broke in 1965) that their first stop was around here (see Manchester Union Leader, Oct 26, 1965).

As Betty walks the dog:

she noted that the star, or the light, or whatever it was in the September sky, was definitely moving. -Fuller

The Webb interview (a month after the event) does not say, at this point in the journey, that the light was moving while the car was stopped. Marden's book does not include this stop at all - they first stopped to walk the dog at Mt Cleveland, followed by other stops after that.

Even if the object did appear to be moving at this point, read this for an explanation, or go outside on a dark night and fixate on a bright star. Attempting to view any tiny object through binoculars will also give the illusion that it's moving, since it's hard to keep your arms steady.

Assuming "several" means at least three, we are told they stop a second, third, and fourth time:

The object they saw in the sky near Route 3… south of Lancaster, New Hampshire, continued its unpredictable movement as they passed through Whitefield and the village of Twin Mountain. They stopped briefly several times, and by now Barney was frankly puzzled. -Fuller

These movements are simply the beacon appearing to move against the night sky as they travel around the twists and turns of the road, approaching Franconia Notch.

the light on top of Cannon Mountain is visible at various points along this entire route - sometimes high, sometimes low, sometimes to the right of the road, and sometimes to the left... [and does] move against the starfield as you drive south. -Jim
From that 10:05 PM starting point in Colebrook, it's 59 miles to the Mt Cleveland picnic area (at "never more than 30 mph" - say 1 hour 55 mins) where Marden says they stopped the first time, but in Fuller's account it's their fifth stop. I'm allowing 5 minutes for each of the previous four stops, and 10 minutes for this one, so it's 12:30AM by the time they set off again.

Certainly it can't be "around" 11PM, as Fuller claims - and remember the Hills never get a time-check from their watches. This failure to accurately measure time will be the reason the Hills later come to believe they have "missing time." I promise you, they don't.

The Mt Cleveland picnic area is suggested by Jim Macdonald as the one (from a few options) where he thinks the Hills stopped. Marden says you can't see the beacon from there, and there are indeed trees lining the road that block the view. Assuming the trees were as tall in 1961, it must be the case that the Hills actually stopped at a different location where the beacon was visible. There are turnouts all along the road at this point, rather than actual picnic areas.

Why does Marden name Mt Cleveland picnic area? The Hills don't name the spot in any early recount including Webb (1961) or Fuller (1965). Mt Cleveland is "convenient" because it disproves the beacon theory, again assuming the trees haven't since grown taller. I will note that the trees south of Indian Head Resort where Barney stopped for the last time are about twice as tall now as they were in the re-enactment photos by Webb. If those trees were shorter, or if Barney found a break in the trees, there is a clear line of sight to the beacon.

The only description of where they stopped in the early sources is from Fuller:

“a picnic area with a wide view to the west.” - Fuller

Regardless of exactly where they stopped, the approach to the area is a series of S-bends, making the beacon swing all over the place:

Barney slowed the car down near a picnic turnout... and looked again at the strange moving light... it swung suddenly from its northern flight pattern, turning to the west, then completing its turn and heading back directly toward them. -Fuller 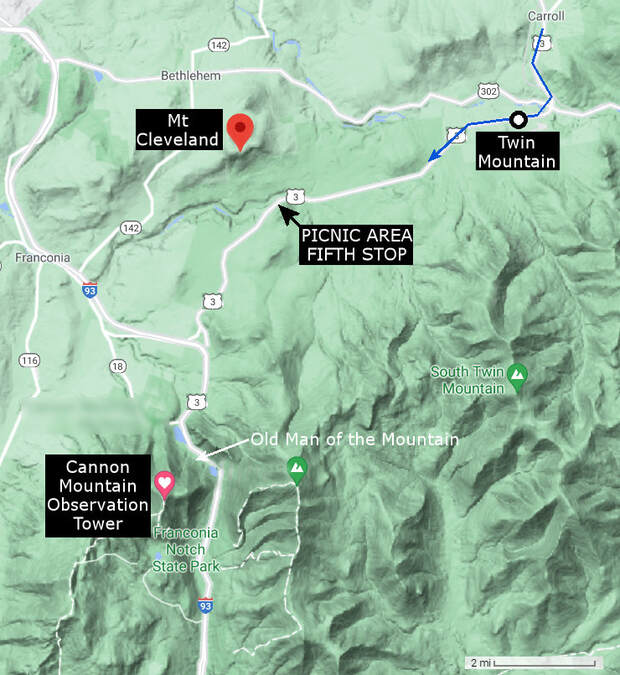 The twisty approach to the Mt Cleveland picnic area.
Lest you think what the Hills are observing looks like a well-defined flying saucer - it's not. In the Manchester Union Leader, Oct 26, 1965, shortly after the story broke in the Boston Traveler, Betty reports the UFO looked like a "huge star" as they drove in the Cannon Mountain area.

To illustrate how a fixed light appears to move dramatically while you're driving around a bend, I drove my Google car on Route 3 approaching Mt Cleveland (now 6.8 miles away as-the-crow-flies). I've darkened the images and added a stationary light on a distant mountain peak.

This part of the road curves to the right. In the dark with no street lighting you’re not going to see those curves until you come to them. You’ll have no sense of how much you’re turning - especially if you’re focused on that light. It appears to swing across the road and might even disappear completely when trees get in the way.

They get out of the car at the picnic area, the fifth stop. Through binoculars, Barney can make out "a shape, like the fuselage of a plane" with "a blinking series of lights along the fuselage or whatever it was" [Fuller]. He "observed a row of windows" [Marden].

Fuller does not describe the object moving while the car is stopped until we dive into the recovered memories portion of the program. In Fuller's and Marden's books, Betty sees the object cross the face of the moon, flashing colored lights:

​It appeared to be flashing thin pencils of different colored lights, rotating around an object which at that time appeared cigar shaped. -Fuller

As Webb admits in his revised report, this was a "recovered memory" from hypnosis and you know how I feel about that.

Now, about those windows. The Hills never mentioned them to Webb at this stage in 1961. And in Betty's letter to Keyhoe they didn't see windows until the final "close encounter" stop, south of Indian Head. But Fuller says this is where they see windows and a distinct shape to the object (also, further along the Notch, "a band of light first straight, then somewhat convex as if conforming to the edge of a flattened disc" [Webb]), so let's see what that could mean.

Through binoculars, they are viewing the observation tower from a few miles away at various angles. Seen from far below, a foreshortening effect will bring the light closer to the building underneath. It's possible what they're seeing is the outlines of the roof and windows, illuminated by reflected light from the beacon, as well as light reflecting off the pylons of the tower that could give the impression of "fins" which Barney later describes. 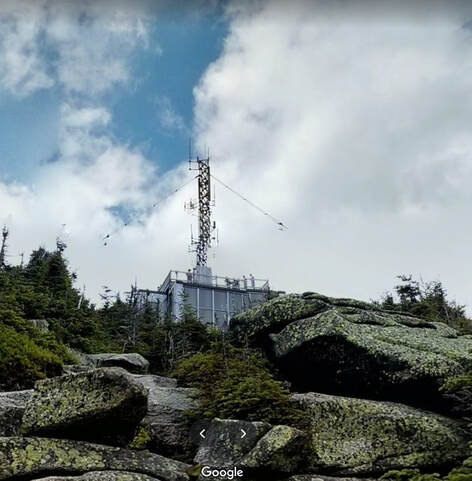 Cannon Mountain Observation Tower building and pylons.
> Go to PART 3: The endless river, in which the miles flow past.
(c) Charlie Wiser 2021