Part 4: A Momentary Lapse of Reason

Let there be more light

The Hills have just viewed the Cannon Mountain Observation Tower beacon at its closest vantage point on their long drive home. It's hovering right outside Betty's window as they round the base of the mountain at approximately 1:20AM, although we've been told by writers Fuller and Marden that it's 11:10PM.

As the car moved by the darkened silhouette of the Old Man of the Mountain, the object appeared again, gliding silently, leisurely, parallel to the car to the west of them, on the Vermont side of the car. It was more wooded here, more difficult to keep the object in sight as it glided behind the trees. But it was there, moving with them. -Fuller

The reason it appears to be following alongside them is because its distance from the car has remained the same for a while: 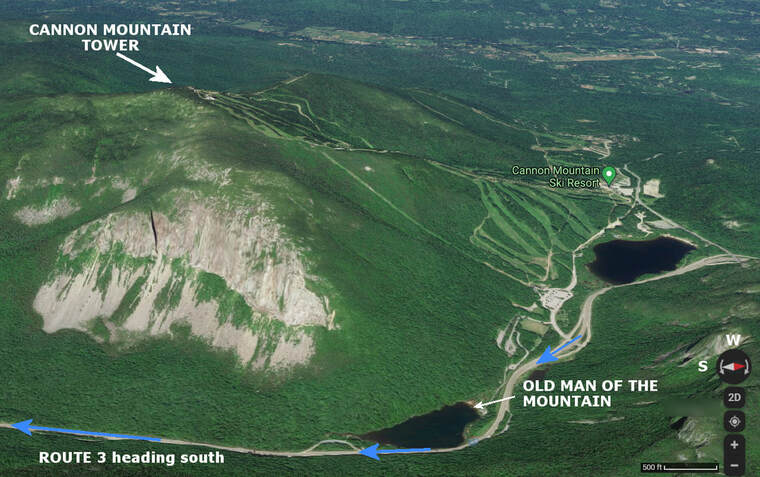 The Hills' route going around Cannon Mountain.
Near The Flume [4 miles later], a tourist attraction, they stopped again [seventh stop], almost got a sharp, clear look at it, but again the trees intervened. -Fuller

As they continue south, the beacon swings around behind them, following the curves of the road such as this S-bend. 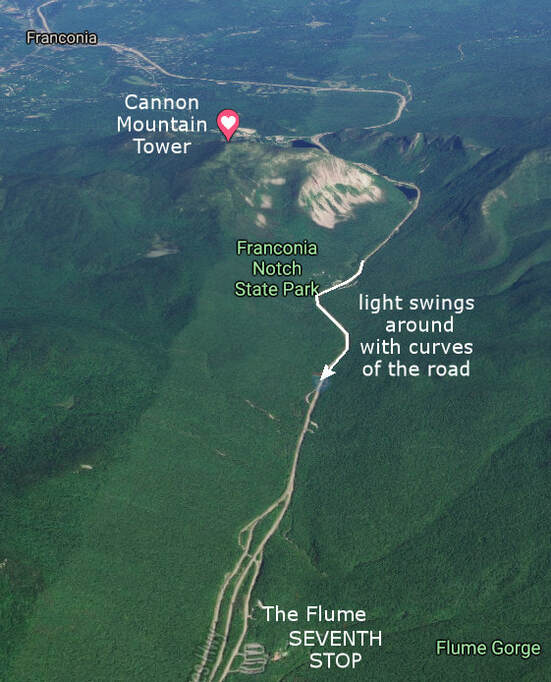 Continuing south on Route 3, past the Flume (seventh stop). 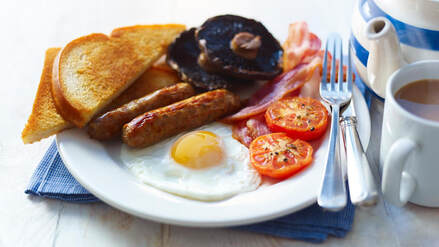 The Hills are about to have their Close Encounter! Are you as excited as I am?

A curve to the left in the road now shifted the object to the right of the car, but the distance remained the same. -Fuller

This is my favorite line in Fuller's book because it tells the reader that a bendy road makes a stationary object appear to move. Not that Fuller, Betty, or Barney (or those who came after them) took the lesson to heart.

Anyway, last chance to bail out of this thing...

Just beyond The Flume they passed a small motel... A man was standing in the doorway of one of the cottages, and Betty thought how easy it would be to end the whole situation right now by simply pulling into the motel.​ -Fuller

But despite Betty's "overwhelming" curiosity about the object, she doesn't want to ask this early-rising local (we'll call him Alan) about it. Alan might tell her it's the goddamned beacon on Cannon Mountain, ma'am, which would make her feel rather foolish.

I want to track down exactly where Betty and Barney made their eighth stop and witnessed such a stunning sight it led to their story becoming America's second-favorite (after Travis Walton) UFO abduction story in history.

Cue the dramatic music! They're about to see this thing up close, complete with the little Nazi alien and the little red-headed Irish alien at the window who are visiting Earth in order to learn how to prepare squash.

There are plenty of clues to pinpoint the location:

they pulled into the parking area at The Flume... they continued driving south past Indian Head and into a more open area... At this point he was 2.3 miles north of North Woodstock (from speedometer and topographic map measurements by the writer). -Webb

Just beyond The Flume... he saw two imitation commercial wigwams on the site of a closed-down enterprise known as Natureland.​​ -Fuller [Marden says the wigwams signaled Indian Head, by which she may mean Indian Head Resort though she never mentions the resort. The rock formation Indian Head itself is on the other side of the road directly opposite the Flume, a mile north of the resort.]

Indian Head is a rock formation to the west of Route 3, about 5 miles south of the Flume. The Betty and Barney Hill historical marker (dated 2011) and Indian Head Resort are another mile south. The encounter site is yet another mile south, past Natureland (now Whale's Tale), a total of 8.3 miles from the base of Cannon Mountain, which takes 15 minutes. They also made that seventh stop, so it's now 1:40AM.

​Let's rev up our Google drone! Here we're driving due south, passing the historical marker on the left near the resort, and approaching Natureland ahead on the right: 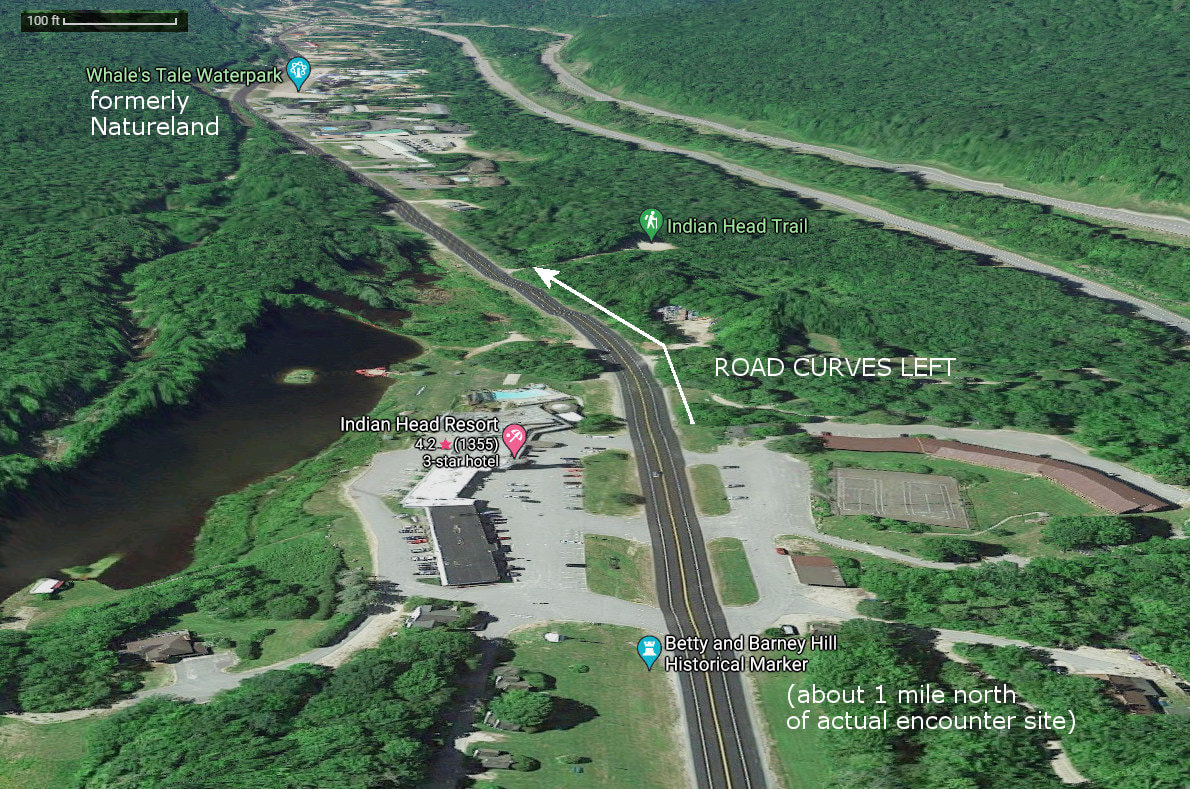 As we pass Natureland, we reach the one-mile mark south of Indian Head Resort. The Hills stopped somewhere here... 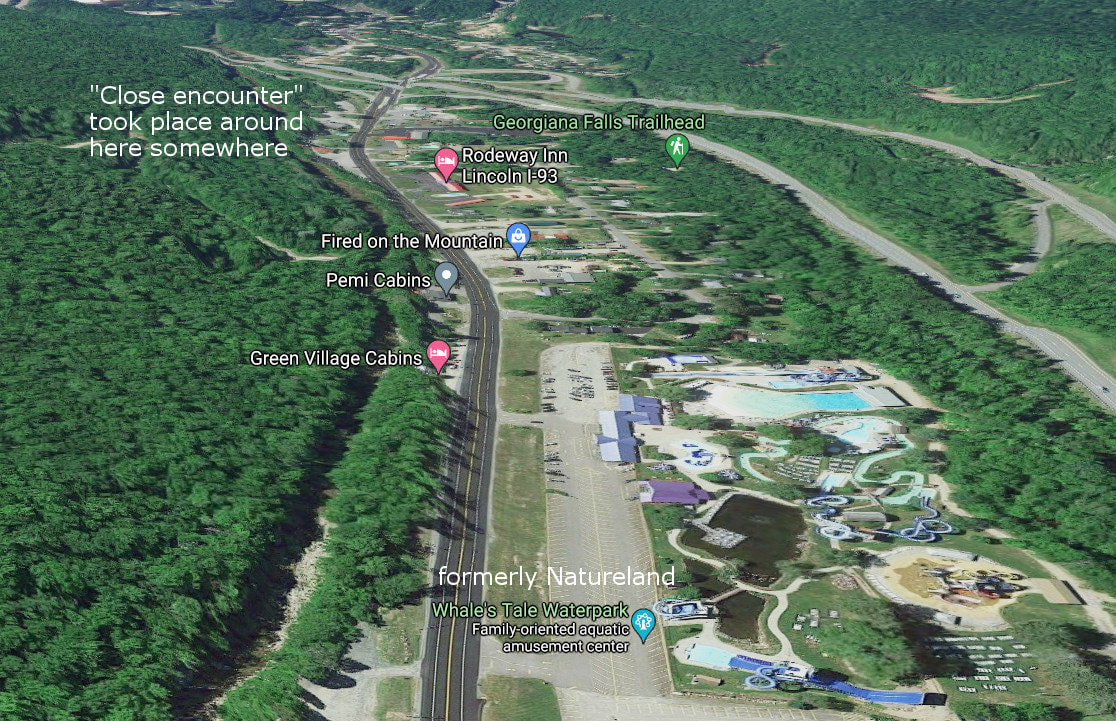 Hopping in the Google car to magnify the experience...

The next photo shows the exact spot where Barney stopped the car (in the middle of the road). I matched this shot up with Webb's reenactment photos (1964), using landmarks such as the upcoming curve to the right and the house with the steep roof, which was there in 1961.

Barney first looks to the W/SW (more on that later). Then the object crosses the road, so Barney does the same and moves to a "field" to look east. The Longhorn restaurant was not built until 1965; this entire area was more like a wide grass verge in 1961 - hardly a "field" but we'll let that slide. Marden's book has a photo of the "field" on page 106.
NOTE: I have examined Webb's original color photos of the reenactment (featuring Barney Hill). I have not asked for, or received, permission to use them so will not be posting them at this time. If anyone is able to help me get permission, please email me at the address on the Home page.

This map shows the location in context - click to enlarge - and a close-up of where Barney got out of the car. The motel was also not built yet.
If you're wondering what this road looked like at the time, wonder no more: 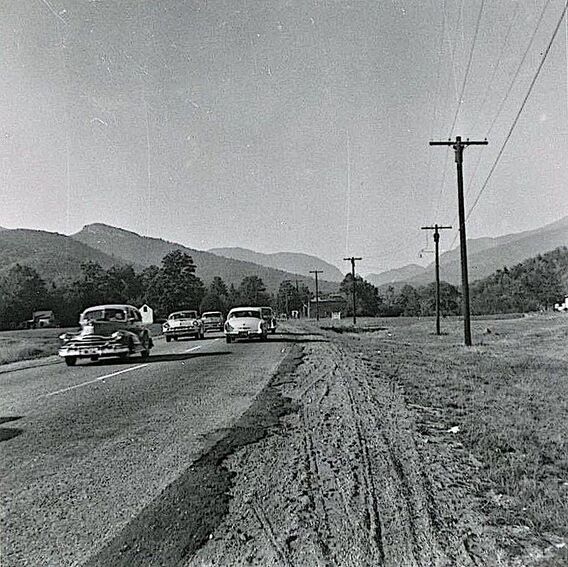 Route 3, Lincoln NH, 1955 from New Hampshire Then and Now

The great gig in the sky 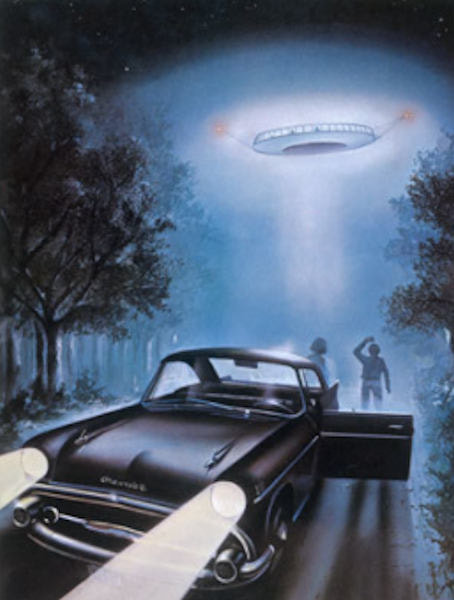 Artist's impression of the Hills' close encounter, bearing no resemblance to any description of the scene they claimed to have witnessed.
As they slow down and stop, and Barney gets out, the object is described as moving oddly:

Mr. Hill slowed down the car. The UFO came down over a clearing on the right, pulled around in front of the car, and stopped in mid-air to the right of the highway... -Webb​

Barney got out, the motor still running, and leaned his arm on the door of the car. By now ​the object had swung toward them and hovered silently in the air... -Fuller

Webb's excerpt is telling us the UFO moved while the car was moving - and we know how that happens. Fuller's excerpt tells us the object had already moved before Barney got out of the car. So neither of these accounts is remarkable once we've identified what he was looking at.

But a moment later:

As he [moved away from the car], the huge object - as wide in diameter as the distance between three telephone poles along the road, Barney later described it - swung in a silent arc directly across the road -Fuller

As an aside: The hugeness of the object comes from hypnotic regression and means nothing since Barney is guessing size and distance in the dark, not to mention it contradicts the Hills' very first report to Maj. Henderson (Pease Air Force Base) via two phone calls in the days following the encounter:

The object [at its closest] was "hundreds of feet above the automobile" and "about the size of a dinner plate held at arms length." -Major Henderson's report (via Webb) as told by the Hills in Sep 1961

So... this entire encounter was not nearly as a dramatic as you might imagine, if your imagination is dreaming up anything like the image on the right. More in the next section about the object's structural appearance, location, and proximity.

The Hills described to Henderson various movements of the object, but his report does not specify whether the final "swoop" occurred while the car was moving or stationary. That's a rather important detail that fell by the wayside, since we know a stationary light can swing all over the place when you're in a moving vehicle on a dark twisty road.

The problem here is that later accounts have been polluted by the hypnotherapy sessions. Under hypnosis, or in fact during any retelling of a tale, the brain fills in details to make a cohesive flowing memory - i.e. it fabricates bits of the memory, and of course embellishes it when emotions are running high. Where does that leave us?

The earliest account, by Henderson, doesn't specify that the object swung around in front of the car while the car was stationary.

As it approached our car, we stopped again. As it hovered in the air in front of us... By this time my husband was standing in the road, watching closely... As it glided closer... -Betty to Keyhoe

So it's approaching, hovering, and gliding closer, but it's not swinging around in an arc.

Next is Webb's interview. After Barney gets out, we find the object moves only when Barney is moving (while trying to keep the thing in his binoculars' field of vision). An alternative explanation is that Barney lost his binoculars' lock on the object (say, Jupiter), then re-locked onto a different object (say, a distant beacon or streetlight or star or satellite or any other light in the sky) and assumed it was the same object that had swung across the road:
​
[He] stepped out on the highway for a better look, bracing his arms on the roof of the car as he peered through the binoculars. When he stepped away from the car, the UFO at that moment moved silently across the highway, passing an estimated 100 feet in front of the car and coming to a stop over the field to the left of the highway. -Webb

Years later, after hypnosis, Fuller explains that Barney stepped away from the car because:

“The car was shaking the binoculars.” Then he stepped a few feet away and looked again. As he did so, the huge object... swung in a silent arc directly across the road, not more than a hundred feet from him. -Fuller

So we have Barney either walking while trying to look through binoculars, or walking and then re-locking on to the object (or another object) with binoculars. Either way, it's easy to see how he might get the impression the object is moving, or has moved from where he previously saw it.

Forty-five years later, the account has morphed to this:

Barney rapidly brought the car to a halt in the middle of the road and grabbed his binoculars for a closer look, opening the car door for a less encumbered view. Quickly, in an arcing movement, it shifted from its location directly ahead and rested above the treetops in an adjacent field. -Marden

What were the Hills actually seeing during this close encounter? The beacon is behind them to the north, and they're facing south, so it's not the beacon.

Webb's reenactment photos (with Barney) show Barney looking through binoculars first to the right of the car, the southwest, where the object appears to be hovering over a clearing "no more than a few hundred feet away" and "80 to 100 feet" above the ground [Webb]; or "not more than a short city block away, not more than two treetops high" [Fuller].

Here's Barney's view looking southwest (the motel is new and this was just a grass field in 1961):

(The arrow is to show that this is indeed the correct spot, when matched up to Webb's reenactment photos.)

​See the trees behind that building? See how the mountain behind them is almost twice as tall as a tree? If something - say, a celestial body - was in the sky just above the mountain, sinking down to the horizon, it would look "not more than two treetops high".

That is exactly where, and when, Jupiter was setting that night (1:43AM in the southwest).

Jupiter is not, of course, the size of a dinner plate, but when a bleary-eyed sleep deprived human is viewing it through unfocused binoculars it, it's fair game.
> Go to PART 5: A saucerful of secrets, in which the flying saucer is boring
(c) Charlie Wiser 2021