They drove on toward Cannon Mountain at not much more than 5 mph, catching glimpses of the object as it moved erratically in the sky. -Fuller

​Here's the road between the picnic area and the base of Cannon Mountain, at Echo Lake, a distance of 5.2 miles. See that blue arrow? That's why your object is moving erratically, Betty. 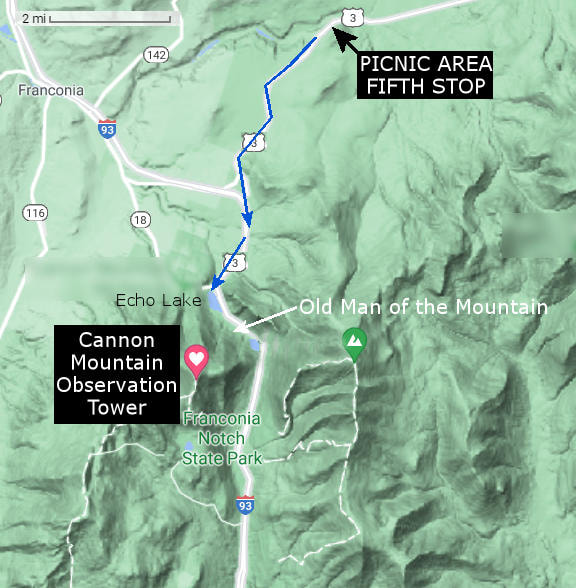 Approach to Cannon Mountain.
You probably noticed that Barney has slowed down to just over 5 mph. Google tells me it's 5.2 miles, so it takes about 45 minutes.

Add 5 minutes for that sixth stop, and it's around 1:20AM when the Hills arrive at the base of Cannon Mountain. Let's assume they pick back up to 30 mph at this location. They reach the Old Man of the Mountain rock formation a couple of minutes later.

Marden (p.103) reports Betty's hypnotic time check of 11:10PM as they near this landmark, but we can ignore that because (1) Betty has already decided, years ago, that she lost 2 hours of time so her brain forgets how to do math, and (2) Marden's family legacy falls apart if there is no missing time, so she also forgets how to do math.

Let's do the math anyway: if it's only 11:10PM, the Hills have just driven 65 miles from Colebrook in 65 minutes. They've managed to maintain an average speed of 60 mph despite:
Why is Barney's time-traveling car not the star of this show? But no, it's a common-or-garden aircraft beacon that gets all the accolades.
The Franconia Notch is a valley through the White Mountains, with Cannon Mountain to the west. When you search for "Cannon Mountain" in Google Maps, it sticks a pin right there on the observation tower. Nearby is Mountain Station, the top end of the aerial tramway that runs down the mountain to Route 3, which incorporates a restaurant.

Take a look at this magnificent 3D view. (Bethlehem at the top right is about 3 miles north of the picnic area where the dog peed, or had already peed.) The blue arrows show Betty and Barney entering the Notch as their "object" grows ever larger.​

The elevation of Cannon Mountain is 4081 feet. The Old Man of the Mountain, at the base, is at 2881 feet, making the observation tower 1200 feet above "ground level". 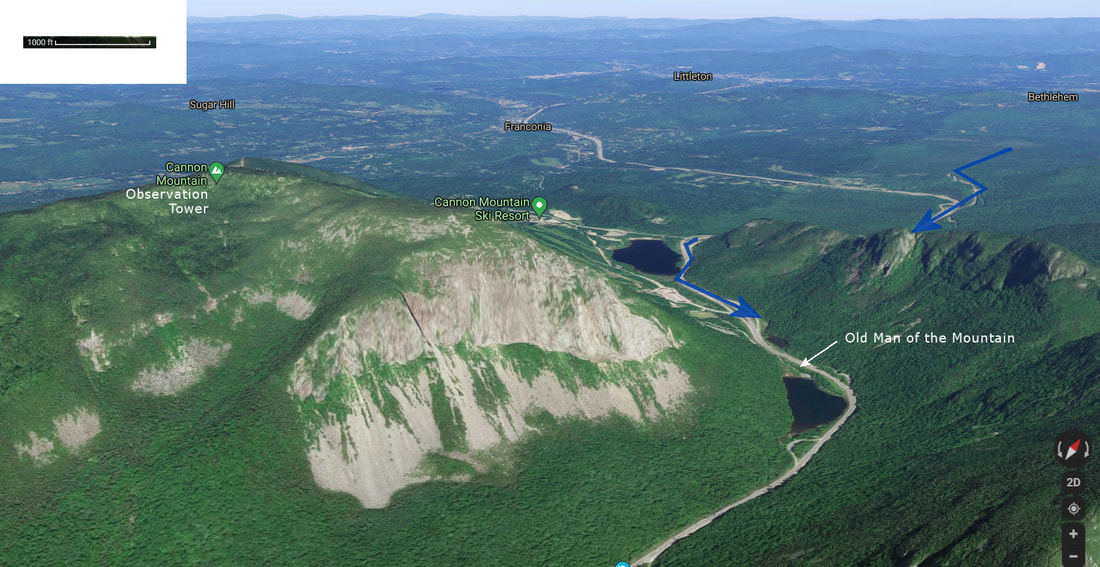 Cannon Mountain and the Franconia Notch, with the Hill's approach from the north on Route 3.

At the top of the mountain, the only light they had seen for miles glowed like a beacon, appearing to be on the top of the closed and silent aerial tramway, or perhaps on the restaurant there. -Fuller

Here we run into the "problem of the two lights" again. There was indeed a restaurant on the top of Cannon Mountain, and Jim confirms that the Hills are indeed seeing the glow from the windows: "According to the nice lady who was running the tram car, there’s always been a snack bar up there... the Coke machines and such would have cast a visible light (as they do to this day)". -Jim

So let's parse that sentence from Fuller.

So what is this other light? It "glowed like a beacon" but is not the beacon, because they theorize it's the restaurant. (In context, this use of the word beacon means it's beckoning to them as the first sign of civilization for miles.) You can't mistake one for the other: One is a glowing coke machine, the other is a frickin' powerful beacon visible for miles all around that helps aircraft not crash into mountains.

The Hills can see the restaurant windows glowing. Why can't they also see the observation tower light?

Because they've mistaken it for a flying saucer. That's why.

Betty's recollection under hypnosis, showing she is aware of the restaurant light but not the beacon light. Fuller p. 147
This is the view from the north, looking south (reverse of the previous 3D image) with the Hills' approach marked. You can see the beacon and building near it, which is the new, large tramway station (built 1980) and restaurant (Cafe 4080). The original tramway station is a smaller building right next to the new one.

Approaching Cannon Mountain from the north.

Back into my Google car to see what we can see up there on the mountain peak - remembering that in the dark the Hills can't see those peaks at all. All they can see is a disembodied bright light floating past the starscape.

Here we're coming around the bend and - hey! there you are! The restaurant comes into view (followed by the beacon). Note, however, that the restaurant windows "face northeast; a traveler approaching from the northwest wouldn't have a view of them until quite close and alongside." -Jim

So, while in daylight the restaurant and beacon are both visible at the same time, and disappear together, in the dark the restaurant glow is only apparent for a portion of this time.

A little further down the road, we're now driving alongside the mountain, past Echo Lake, and the beacon swings across the road from left to right.

Wait, it does what!?

Driving south at the base of Cannon Mountain

Don't take my word for it. Type these coordinates into Google Maps and take the drive south for yourself for two-thirds of a mile.

Now of course Betty can turn her head right and still see the beacon over her shoulder for another half-mile. The point of this is to show you, once again, how a stationary object in the dead of night really can swing across the road and freak her out.

As they continue through the Notch, the shoulder of the mountain eventually hides both the restaurant and the beacon - at these coordinates.
They stopped again near the base of the mountain, momentarily [sixth stop], as the object suddenly swung behind the dark silhouette and disappeared. At the same moment, the light on the top of the mountain went out, inexplicably. -Fuller 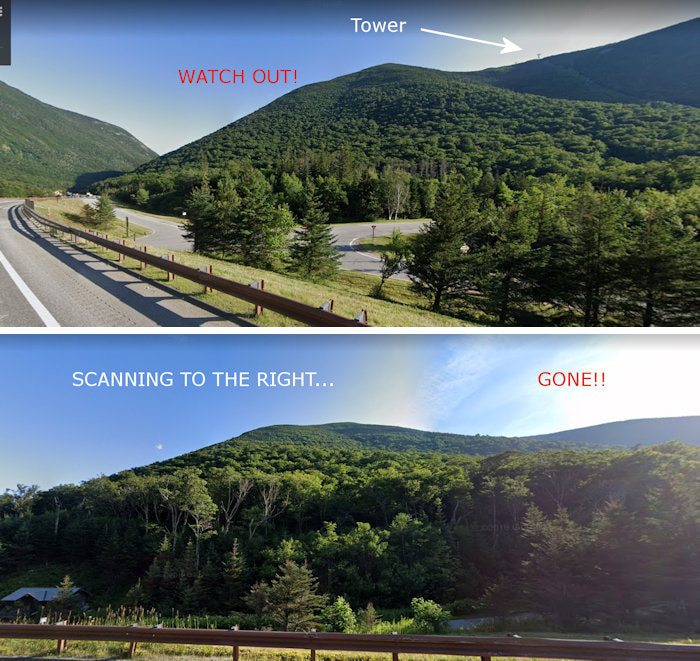 Betty's flying saucer swings around and disappears, and the [restaurant] light "inexplicably" goes out too. GOD THIS IS SO STUPID.
I don't mean to say that Betty is stupid - she's confused and frightened and monumentally ill-informed. And I'm having fun driving through the beautiful White Mountains, I truly am. But GOD THIS IS REALLY ​STUPID.

And since it's the beacon, there's no flying saucer.

And since there's no flying saucer (and no missing time, as we're discovering), there's no alien abduction.

But I'm getting ahead of myself. Here's a map showing where the beacon becomes visible, then "disappears", during this portion of the drive: 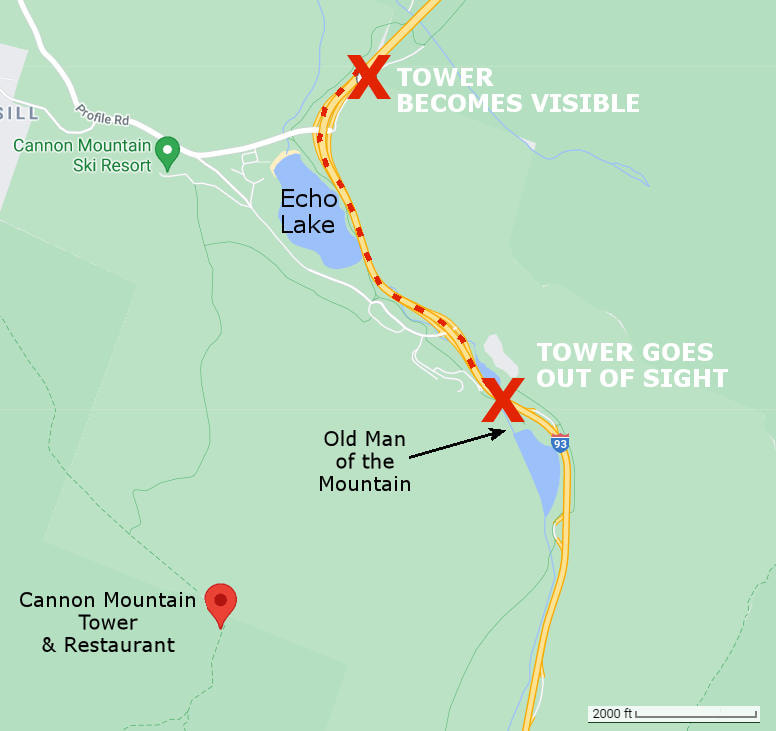 Map of Franconia Notch showing where the Cannon Mountain beacon and restaurant are visible.

One more thing before we move on:

Mrs. Hill could also detect something else: the strange object was traveling very erratically, in a step-like flight pattern, tilting vertically as it climbed each step, leveling off, dropping vertically, leveling off, tilting upward again, etc. All the time it seemed to be spinning. -Webb

​(We might ask ourselves why a flying saucer with the technology to cross the galaxy hasn't learned how to fly straight. Let's just run with it since things are already nutty enough.)

He described how it moved in a stair-step pattern, rising vertically, and then moving horizontally for a short distance before it dipped down. -Marden

I have two theories on what the step-like pattern of the light could be, especially as this was the only time this strange behavior was seen. The restaurant and station at the top of the mountain, along with the observation tower deck itself, all have windows that the Hills would be observing at different angles as they round the base of the mountain. Could reflected light from the beacon in these windows cause the light to appear to move in various angular directions? Another possibility is that because trees lining the road obscure the view at times, the light may abruptly appear and disappear as the forest and clearing pass by the car window.

From Betty's letter to Keyhoe, 1 week after the encounter, with her diagram of the object's flight path
The Hills sail past the Old Man of the Mountain (a rock formation that has since collapsed) with the object going in and out of sight behind trees...
> Go to PART 4: A momentary lapse of reason, in which reason lapses
(c) Charlie Wiser 2021