Barney becomes terrified of the inch-high Nazi alien leader in the craft who's staring him down (even though "he was not close enough to see any facial characteristics on the figures" [Webb]). He returns to the car in a panic, claiming "They're going to capture us," and "spurted off down the road."

Betty lowers her window and looks back, seeing no sign of the flying saucer, entirely unaware in this moment that the aliens were hoping to share recipes and learn about human dentistry. (I mean, that's my best guess. What are your ideas on exactly what they were up to, chasing a terrified couple and its dachshund through half of New Hampshire?)

As we started to move, we heard several buzzing or beeping sounds. -Betty to Keyhoe

The car had traveled only a short distance ("5 or 6 blocks") when the Hills heard a series of beeping or buzzing sounds. -Webb

Hmm, which version to accept? I'll take the first one: When you spurt off down a road, it can kick up some gravel. Webb's version works, too, since in his report the next bit comes first (Betty noticing the UFO is gone) followed by the gravel hitting the muffler as Barney floors the gas.

Or was it Delsey whimpering under the seat where she's been hiding for hours while her humans freak out over a beacon and Jupiter and... whatever that other thing was? (Betty's imagination, I expect, followed by the accidental indoctrination of her suggestible husband.)

Betty checked again, but all she could see was total darkness. She looked out the rear window, saw nothing - except the stars, then visible through the window. -Fuller

What this is trying to tell us is that Betty couldn't see the flying saucer from her side window because it was zooming along low and directly over the car, blocking the stars. She will realize this in a few years while under hypnosis. I know, I chuckled too. Absence of evidence is evidence of presence. Every skeptical mind on the planet just imploded.

When Betty looks back searching for the UFO, unable to find it, she's looking north again - toward Cannon Mountain. Guess what else disappears at the same time as the "object"?

"2.1 miles south of Indian Head is the last time the Lookout Tower Light is visible from Rt. 3." -Jim

My Google car confirms this is true. From Indian head, 2.1 miles takes us to the (second) turnoff for Hanson Farm Road. It's only about 500 feet from where Barney stopped the car a few minutes ago. One more click along the road and it's gone. 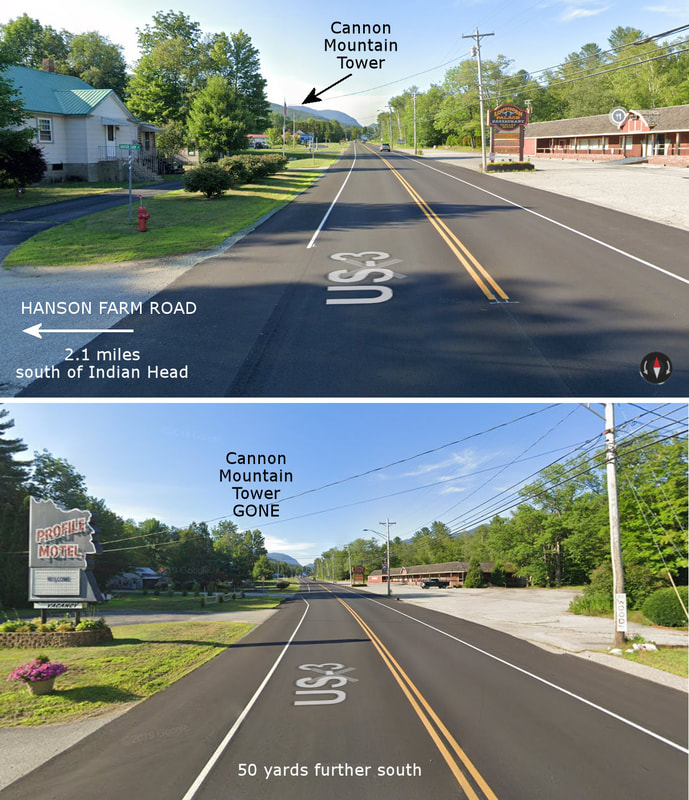 Last sighting of the beacon on Cannon Mountain, 2.1 miles south of Indian Head.

The next memory reported by Webb is 35 miles later, at Ashland (actually, it's 30 miles from the encounter site, so I'll use that figure), when Betty asks Barney: "Do you believe in flying saucers?" and he replies: "Don't be ridiculous. That wasn't a flying saucer." This is followed by some more beeps.

Two months later, when two NICAP members assess this journey as having two hours of "missing time", the abduction is theorized to have taken place between these sets of beeps. Under hypnosis (according to Webb's amended report, written after the sessions), Barney says he was compelled to turn off the highway and drive down a twisty road through the woods for about 15 miles.
​
According to Marden, Barney may have turned off about 3 miles after the encounter (just north of Woodstock). They travel along 175 for 2.5 miles, then take a 20-mile detour along Tripoli Road via Waterville Valley, getting abducted and divulging squash recipes (it never gets old) along the way.

After an uninspired medical examination using suspiciously 20th-century technology such as microscope slides and a scary amniocentesis needle, they are sent on their way, rejoining 175 into Plymouth. Then back on Route 3 and another 6 miles to Ashland where the beeps are heard again. 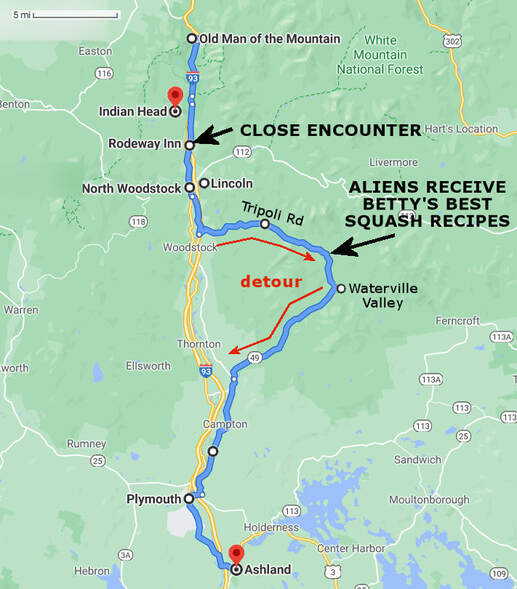 Proposed Hills "abduction" site on Tripoli Rd, from Marden
​Fuller's account is in a different order: they remember hearing the second set of beeps and finding themselves in a "silent, numb, and somnambulistic" state of mind near Ashland. Betty then asks: “Now do you believe in flying saucers?” and Barney answers: “Don’t be ridiculous. Of course not.”

Time check! They left the close encounter at 1:45AM, turned off Route 3, and soon found themselves in the woods. The entire detour, up until they become aware they are "near Ashland", is 41 miles and takes 1 hour and 25 minutes. It's now 3:10AM.

Coming back to life

But neither can remember much detail, other than this, until they had driven on to the new throughway, U.S. 93. Not long after entering this highway [20 miles further south at Tilton, at 3:45AM], Betty suddenly snapped out of her semi-wakefulness and pointed to a sign reading: CONCORD—17 MILES. -Fuller

This reads as though the beeps drew them out of their "semi-wakefulness", and then they fully awoke when they hit the superhighway, as one does.

By the way, we know they entered at Tilton because from there it is 17 miles to Concord:

U.S. 93 (now I-93) heading south from Tilton.
Barney, too, remembers his mind clearing at this point. He does not even recall being disturbed or concerned about the thirty-five miles between Indian Head and Ashland, about which he seemed to remember nothing. -Fuller

It's this kind of statement that makes me think the entire close encounter near Indian Head is about to become enormously embellished in the days to come, especially after Betty reads her Keyhoe UFO book, resulting in a taller tale before we've barely started. Barney is just so damn chill about the surrounding events.

​Why this "semi-wakefulness" for 30 miles?

We've all experienced it - or if we haven't, we had better: David Gilmour's guitar solo.

The highway. Stretching ahead of you. Rolling away behind you. Mile after monotonous mile.

Wrapped in the cozy cocoon of your metal box on wheels, the scenery never changes. The engine's white noise. The road's white line. You are comfortable. You are numb.

You "come to" (or run off the road) and realize you don't remember how you came to be where you are.

Your first thought (please tell me it's not): Holy crap, I was just abducted by aliens!

It's been a long ride for the Hills - endless dark miles "on unlighted two-lane blacktop, mostly through woods and beside fields." -Jim

And that's even without the tricky issue of being chased by a flying saucer.

It's well past Betty's bedtime, and Barney's diurnal rhythm is scewier than an S-bend in the Franconia Notch. It's likely the Hills are now suffering from sensory deprivation as well as sleep deprivation. No wonder they zoned out and don't remember the last 30 miles...

(There was technically nobody home until the Hills got home, but apparently they felt weird and sticky and kept looking outside to see if the flying saucer had come back with Barney's teeth.)

The Hills get home and put the kettle on. As they ponder those 30 miles, they discover they remember the following snippets (taken from Fuller):
HANG ON, DID YOU SAY PUMPKIN??

Near Concord, they looked for a place to have a cup of coffee, but nothing was open, anywhere. -Fuller

Add Concord to the list, and what we have here is a list of pretty much every town they passed through during that 30 mile stretch.

What about missing time?

Inside, the kitchen clock read shortly after five in the morning. -Fuller