Part 5: A Saucerful of Secrets

Welcome to the machine

How about them soon-to-be squash-eating aliens?
Let's get this said up front:​ the Hills' close encounter one mile south of the Indian Head Resort was a UFO.

I have no idea what it was. It's unidentified.

The beacon, however, is identified. It's "chased" them for 35 miles all the way from Mt Prospect, moving in time with the road's curves, disappearing and reappearing in the expected spots. The odds a real flying saucer suddenly appeared on the road after they'd just seen a fake one are slim at best.

The Hills are all over the map when it comes to describing their close encounter, and we need to distinguish between their initial reports and those embellished after hypnotherapy.

By now Betty has noticed (according to Webb and Fuller) that the craft has a double row of windows but she never sees the aliens inside. It has stopped spinning and has a red light on each side.

In their initial report to Henderson, the Hills said the object was, at its closest, hundreds of feet above them. Extended wings with red lights are mentioned, but not windows or occupants.

In her letter to Keyhoe a few days later (after reading The Flying Saucer Conspiracy), Betty doesn't say how far away the object was but does say Barney (and only Barney) saw occupants "the size of a pencil". How these wee folk fit inside a pancake-shaped dinner-plate-sized craft is not a situation I care to evaluate.

In a Playboy interview, Betty says:

Excerpt from Playboy, January 1978, p. 73, from the article: PLAYBOY PANEL: UFOs - an earthly debate between believers and skeptics...
Wait, Barney doesn't mention seeing actual real live aliens until the next day?! What a stunning thing to forget to tell your wife who was at your side for most of the experience.

A week later, Betty has strange dreams about an abduction and squash mash, and tells Barney all about it.

A month after the incident, they describe the object as "not more than 100 feet away" [Webb] while hovering to the right of the highway, and "as wide in diameter as the distance between three telephone poles" [Fuller].

I found a field and held up a dinner plate at arm's length and it wasn't covering anywhere near the distance between three telephone poles 100 feet away, by the way, but maybe Australian dinner plates are tiny or our telephone poles are wider apart or something.

Somehow Betty fails to see this monstrosity, despite being close enough to hear Barney saying: "I don't believe it, I don't believe it." With the naked eye, the figures are an inch tall at arm's length, which makes their dinner plate a bit more roomy. Barney gets to within 50 to 100 feet of the craft and the entire experience lasts "at least half a minute to several minutes." (Marden says 4 or 5 minutes.)

Marden's measurements are "not more than 300 feet away from him, and approximately 50 feet in the air" which, as we'll see in a minute, is impossible despite her assurances to me that her book is "the truth" thanks to her having "spent years investigating this case".

Webb submitted a new report in 1965, after hypnotic regression had filled in details of the sighting in which a ladder extending from the craft has been added to the story, along with the leader's telepathic control of Barney. (Also, of course, the abduction part of the story, drawn from Betty's "dreams", was incorporated during hypnosis.)

Fuller adds more details in his 1965 book: Betty asks, "Do you see it? Do you see it?" when Barney gets out of the car. This is another reminder that this thing is so unimpressive that either Betty can't see it (as in Webb's report), or she can see it and feels the need to point it out to Barney in case he missed it. It's not even clear from Fuller's book that Betty sees the craft swing across the road.

Fuller says Barney walks 200 feet away from the car across the field toward the craft, and comes "within 50 feet of it" as it drops to the height of a single tree. He estimates it's as wide as the length of a jet airliner. Here's Webb's diagram of the encounter:

Webb's 1965 diagram of the close encounter
Looking at this, I have to wonder if Webb ever went to the site. I mean, I know he did because he photographed Barney doing a reenactment. But the photo, the description of Barney walking 200 feet (let alone 300 feet!) and this diagram showing his direction of movement away from the car and almost perpendicular to it... these accounts just don't tally. In the diagram Barney is clearly not standing 200 feet from the car. He's going to hit that embankment on the left before he can walk even 100 feet.

Maybe this is a brilliant artistic representation of perspective, and the embankment is 200 feet away, plus another 50 feet for the craft. Unfortunately, that can't be the case because only 80 feet east of the car's position is the bank of the Pemigewasset River. The embankment is huge - like, many-times-taller-than-Barney-huge, and you can't actually get further than 70 feet from the car, or about 120 feet if the car was a little further down the road (but then that doesn't match Webb's other photos that show us where the car was).

This is what the scene looks like today. The restaurant had not been built in 1961 and there was no paved gutter, just a wild grass verge meeting the edge of the road, dotted with trees. 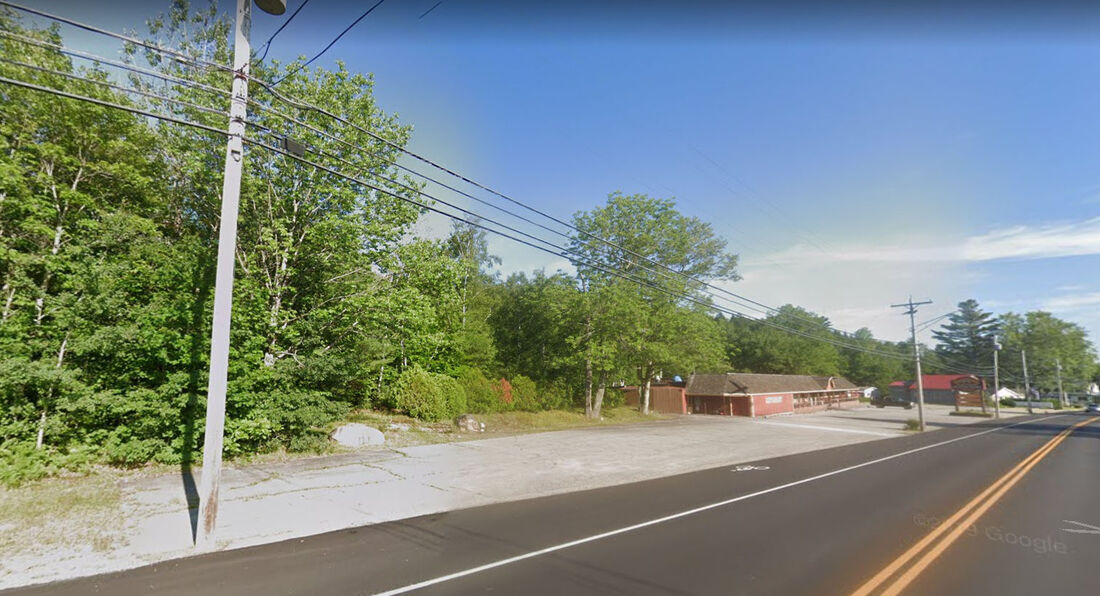 The "field" where Barney walked 200 feet away from the car and came within 50 feet of the craft
How shall we put Barney 200-300 feet from the car without getting his feet wet?

He must've walked down the road. In that case, the scene looks like this - and again, this is nothing like Webb's diagram or photos, but it's the only way to make it work:

Position of the Hills' car, Barney 200 feet away, and the UFO 50 feet from him, 100 feet in the air.
Note: That green-roofed house is in the 1961 photos, and the car was north of it at the distance shown. Fuller mentions that Barney was "near a shuttered vegetable stand", which is visible in Webb's photos (if it's the same one, 4 years later), and which means Webb agrees with my placement of the car.

This scene looks different again if we use Marden's figures, but I see no reason for her to pluck those out of thin air when we can refer to an earlier report. Speaking of which, a reminder that in the earliest report to Henderson the object was not described as being any closer than "hundreds of feet" above them. Marden shrinks this to 50 feet.

In any case, given the river is right there, and the UFO was at the height of a tall tree, and taking into account Barney couldn't actually tell how high or near it was anyway, diagrams are rather pointless. What I find puzzling is that Webb describes him "moving across the road on the driver’s side of the car, on to the field, and across the field, directly toward [the UFO]."

But to make the distances work, he wasn't going "across the field" - he was going "down the road." Yet the photos show him staring due east, straight at the river embankment and much less than 100 feet from the car.

Maybe Webb and Barney's reenactment photos are wrong? This is a puzzle I have no answer for, except that it once again reminds us the size and distance of a lighted thing in the sky, when you don't know what that thing is, are impossible to judge.

It's quite likely Barney is latching on to any light he can find with his binoculars, whether it be Jupiter in the southwest, a plane overhead, or something over the river - he's irritated, confused, and exhausted right now, and seconds from freaking out about being captured by aliens (even though he later dismisses Betty's talk of aliens). In that mental state, in the dead of night, on a lonely highway, who knows what he's seeing.

Careful with that axe, Eugene* ​

*(Did you really think I'd do this whole bit and not use this one, however irrelevant?)
This UFO used to be a band of light. Over time, it became a spinning flashing Christmas tree!
​
It appeared to be flashing thin pencils of different colored lights... The lights were flashing persistently, red, amber, green and blue.​ -Fuller

Through the binoculars she had seen the odd-shaped object travel across the face of the moon, flashing multicolored points of light. - Marden

The above two accounts were extracted via hypnosis and don't match the earlier reports. The Hills never mentioned multi-colored lights in their interview with Webb (1961). Nor did they report them to Maj. Henderson the day after the incident:

Maj. Henderson's report (Sep 1961) after speaking to the Hills
When unforgettable things are "forgotten" in an initial report, I tend to suspect they materialized from someone's imagination at a later date.

"The Hills remember that no light from the thing fell on the ground." -Webb

But honestly, it may have been a spec of dust on Barney's binoculars. It's unidentified.

I'm not going to focus on the aliens because it's all so dumb and uninspired. (Calling occupants of interplanetary craft: Please abduct a talented science fiction writer next time who will return with an imaginative tale. For once.)

It's enough to note that the aliens Barney saw that night made so little impression on him afterward that he failed to tell Betty until the next day, and thought Betty's later dreams about an alien abduction were "nonsense".
> Go to PART 6: The final cut, in which the Hills freak themselves out with bad math
(c) Charlie Wiser 2021