and a tiny house

Back to the scene of the crime 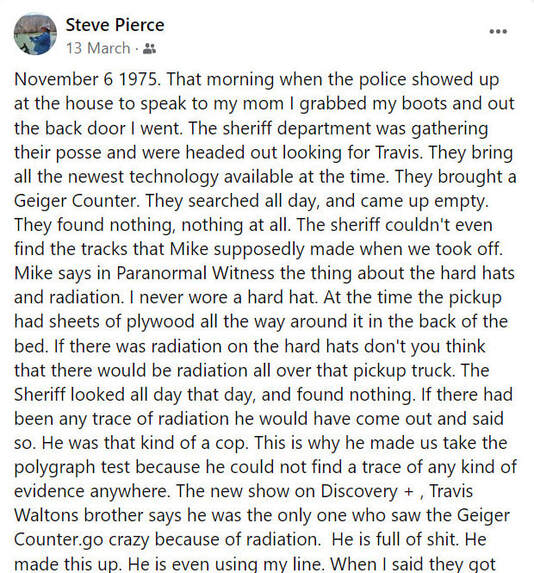 Steve Pierce, Facebook [note time stamps are different time zone]
Steve also explains the reason Allen Dalis removed his wires and didn't complete the polygraph was because his mother had said the cops would rig the test show they were guilty. This had also magnified 17-year-old Steve's fears going into the test. [UFO Classified, Jun 24, 2022]

Despite a huge manhunt - in entirely the wrong area - no trace of Travis was found. Where did he go?
I propose three safe places to hide out:
In this October 2021 interview, Mike Rogers (who will not vouch for Travis's abduction story) hints that Travis's mother knew Travis was safe and that he was possibly hiding out in the cabin:

It was kinda strange to me that we did find her there [at her isolated summer cabin]. This was November 5th and I couldn’t understand why she had a 2-story brick home in Snowflake... - Mike Rogers on the Observation Deck with Captain Ron, Oct 24, 2021

It's possible or even likely that Mike wasn't told where Travis would be hiding out - to ensure he didn't let something slip while Travis was missing. All Mike needed to know was where to park the truck, when to drive away, and to keep the search area near Turkey Springs (far from both Gentry Tower and the cabin).

The third option is both the simplest and the one that producer Ryan Gordon says Travis told him was the hide-out. Travis's mind-numbingly mundane adventures aboard a flying saucer from outer space are clearly ludicrous, and heavily lifted from a Heinlein novel. But the UFO, a.k.a. fire lookout tower, was right there in front of him with a handy-dandy ladder.

And at the top was a sweet Tiny House to hang out for five days before the "UFO" dropped him off, a conveniently short walk from the payphones in Heber.​ 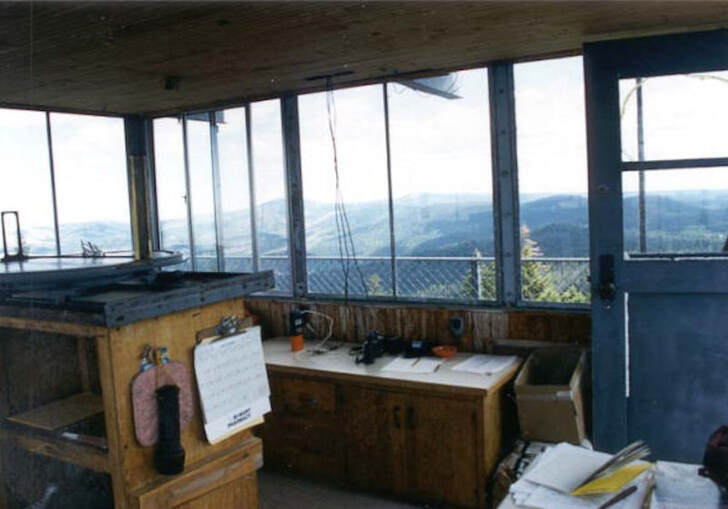 Example of a working tower interior (photo dated 2001) showing the Oswell Fire Finder in the center and the magnificent views.
A new abduction site had been planted in the crew's minds. They unwittingly (along with Mike, wittingly) misled the search parties and, it has to be said, wasted five days of valuable police time.

Does "five days" sound familiar? Isn't that the shift of the Forest Service workers who manned the towers?​

Frantic family... or not

Much has been made of how Travis's mother, Mrs Kellet, reacted on the night she was told her son had been zapped and abducted by aliens. Deputy Sheriff Coplan and Mike Rogers showed up at her cabin, and Coplan later reported to Philip Klass that she took the news very calmly.

Mike, who has recently hinted he believes Travis was hiding out somewhere during those 5 days (and not on a flying saucer), now corroborates this account:

Looking back on it... Mary Kellet did act unusually calm about it. In fact I remember her saying, "Well those things happen.'" ... I always thought that was kinda suspicious. - Mike Rogers on the Observation Deck with Captain Ron, Oct 24, 2021

While Travis was missing, his family and friends were calling NUFORC to report what happened and discuss how the local media was picking up on it. The case was investigated by a local pro-UFO group Ground Saucer Watch (GSW), and I've used excerpts of the witnesses' initial report on these pages. GSW eventually concluded it was a hoax and APRO took over with a more friendly conclusion.

According to Sheriff Gillespie, Mrs. Kellet suggested late on the first day of the search (Nov 6th) that it be called off: "I just don't think there's any use of looking any further... I don't think he's on this earth."

This paper also reported Travis's mother's apparent lack of concern over her son's disappearance. (Note the date - their deadline apparently passed before the media was alerted to Travis's reappearance late Monday evening, the 10th; he called his brother-in-law at 12:05AM on the 11th, and his brother Duane hid him in Phoenix for a while.) 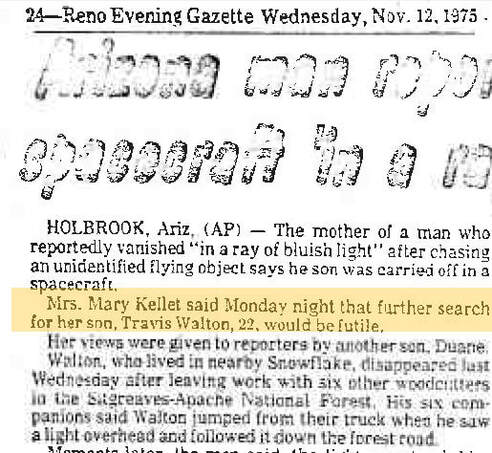 Fred Sylvanus, a Phoenix UFO investigator, interviewed Travis's older brother and "protector" Duane Walton, along with Mike Rogers, on Nov 8th - day three of Travis's disappearance. Although Travis's book relates how Duane was initially irate with the crew, apparently thinking they may have murdered Travis, he quickly accepted their tale that a UFO had taken off with his baby bro.

After that, Duane became weirdly unconcerned with Travis's well-being: "I don't believe he's hurt or injured in any way. He will be back sooner or later, whenever they get done what they're doing. [I] don't feel any fear for him at all. [A] little regret because I haven't been able to experience the same thing. That's about it... He's not even missing. He knows where he's at and I know where he's at... They took him for whatever purpose they take people, to run a few tests... It's a matter of time. They don't kill people..."

He felt Travis was "having the experience of a lifetime. I don't think he's in any danger at all. He'll turn up. All I can say is that I wish I was with him."

Philip J. Klass, Skeptics UFO Newsletter, 1998
During this same interview by Fred Sylvanus, Mike Rogers went over what he'd seen that night but also failed to express concern about Travis, about whether the blue beam had harmed him, or about whether he'd ever see him again.

Travis does not deny his brother's attitude but explains it away by saying Duane was trying "to bolster my mother's morale." But as Klass points out, their mother wasn't present at the interview, and the interview would not be made public until months later.

I would explain Mike and Duane's attitude by saying they knew perfectly well Travis would come back unharmed. ​

A local paper reported a search by horseback and helicopter covered a five-mile area: 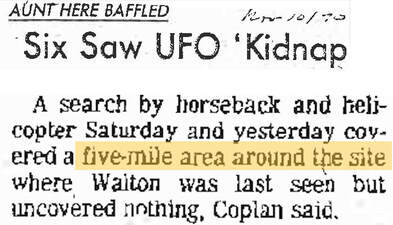 Local paper report from Monday Nov 10th, 1975
APRO who investigated the case confirmed this in their Nov 1975 bulletin. I've added a map:

(The movie shows search dogs, but I've not found contemporaneous evidence that dogs were involved. Travis doesn't mention dogs in the book except to say that Duane and Mike were angry they hadn't been used.)

Five of the six men in the crew, on the other hand, who had fallen under suspicion of murder, had no idea where Travis was or if he'd ever come back. On the fifth day of Travis's disappearance, only hours before he returned (although they were not to know this), they submitted to polygraphs.

​(Actually, five passed, the sixth - Allen Dalis - became understandably upset with the nature of the questions, and refused to continue.)

Without going into why polygraph tests are not admissible in court because they are not reliable indicators of telling the truth, a closer look reveals why this initial test doesn't prove a thing about the abduction.

The witnesses were asked these four questions (in short):

Polygraph questions asked of the six witnesses to Travis's disappearance. 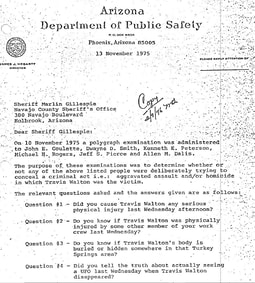 Cover letter for the six witnesses' polygraph results, listing the questions asked. Click to enlarge.
Given that all six of these men did not harm Travis and did see a UFO, it's not surprising they passed the test.

Travis was given a polygraph by the National Enquirer (not law enforcement) when he returned, which he failed. (See Physical Evidence for more details.) Afterwards he claimed he was in no state to take the test. This may or may not be the case - which begs the question, were those terrified, confused, and upset murder suspects in a state to take the test? - but the fact is Travis's failed test was covered up. Jeff Wells, at the time a young reporter sent to cover the story, wrote a hilarious account of the entire sordid affair on his return to Australia (where he became a sports writer).

"The test lasted an hour and I was in the next room fending off the TV crew when I heard the cowboy [Duane Walton] scream: "I'll kill the sonofabitch!"

The kid had failed the test miserably. The polygraph man said it was the plainest case of lying he'd seen in 20 years..." - Jeff Wells, The Age, Jan 6th, 1979.
​
A polygraph was arranged for Travis at the Holbrook police station for Friday November 14, but he failed to show up.
​
Travis has since passed several polygraphs over the years. There's information here and here about how polygraphs (don't) work and how to beat them.

Travis returned with a story to tell, and what a story it was...
​HEINLEIN HEIST >
(c) Charlie Wiser 2021