Liar in the Sky

​​NEW: Analysis of Mike Roger's recorded confession of the hoax
​
ON THIS PAGE:

Raymond E. Fowler of the Woodside Planetarium and Observatory, Mass. (for MUFON) wrote to Allen Hynek (astronomer and UFOlogist) on February 11th, 1976 and reviewed the Travis Walton case.

One of the theories Fowler puts forward is that some of the witnesses were hoaxed by the other crew. He brings up the possibility of the UFO being a “flying saucer model such as sold by Edmund Science.” Involved in the hoax would be Travis, Mike the driver, and an accomplice to fire a “flash gun” when Travis gave a signal. The others misperceived the experience as a genuine glowing flying saucer that fires a beam to knock Travis down.

It seems likely that the "signal" to the accomplice in the tower was probably Travis ducking ("get ready") and standing up again ("go!"). At this moment, Mike drove the truck away.

The idea of “two men hoaxing five” was also suggested by Karl Pflock, who believed in alien spacecraft generally but did not believe Travis Walton’s case was genuine.

A critical part of Fowler’s statement is this:

Those in the truck involved with the hoax would, by exaggerated statements and suggestions to the innocent observers, help further convince them that they had witnessed a real UFO abduction. 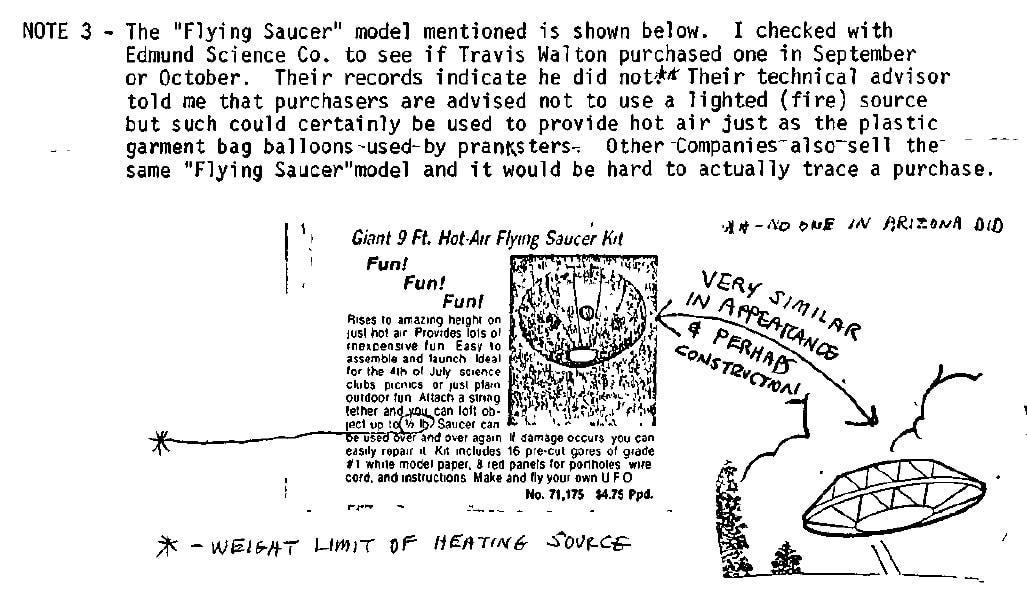 Example of ad for hot-air flying saucer kit, Popular Mechanics, Dec 1970
The entire letter can be found in this pdf, pages 39-41.

​We were talking in the woods one day... We were talking about creating a UFO hoax, okay? I don't know how the UFO got there. But I remember... when I was driving the truck and he jumped out, it was all deliberate. It was all a staged thing, okay? He ran up there and there was something about the UFO not being real, although it looked real.

What you're saying is you and Travis, together, hoaxed this?
​
Yeah...

Robert Sheaffer, co-founder of the Committee for Skeptical Inquiry, put the audio clip in this context:

"...Ryan Gordon, who is planning to produce a documentary to reveal a new angle on this famous case, presents a side of the case that has never been seen before – to not only show that the Walton “abduction” is a hoax, but using information obtained from Travis and Mike themselves, to show exactly how the hoax was accomplished." - Robert Sheaffer, Bad UFOs blog, July 4, 2021

Mike Rogers confirmed the existence of a documentary in the works, and that he had communicated with Ryan and even gone to the (alleged) abduction site with him. Through the first half of 2021, Travis and Mike had been talking on podcasts (etc.) about a forthcoming project - and various acrimonious fallouts because of it.

"[Ryan Gordon] claims in the future he’s going to work with Robert Sheaffer and they’re gonna put together a documentary about all of this. Travis told me a lot of this." - Mike Rogers to Paranormal Pop, July 6, 2021
​
Mike recanted the confession and said the audio was manipulated. A few days later he changed his mind and said the audio was not manipulated but that it referred to something else. While Mike does not vouch for the abduction part of the story, since he wasn't there, he has said "one hundred percent" he did not hoax the UFO sighting.

Scott Browne from UFO Classified, which hosted Ryan Gordon's exposé (which is summarized on this site), spoke with a childhood friend of Travis Walton's who said Travis was obsessed with perpetrating a hoax on the town. 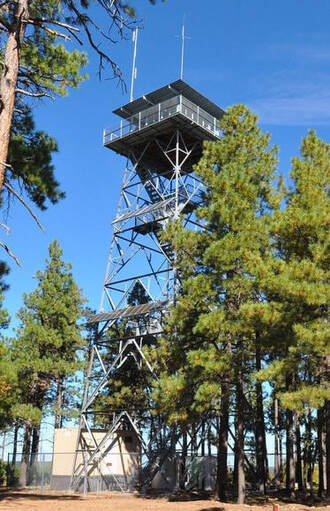 This is true. However, the theory proposes that Mike drove the truck to Gentry tower that night and the crew thought the lit-up cab, 70 feet in the air, was a UFO. The evidence laid out here shows that: These points and many more help paint a picture of what really happened that night. There was no flying saucer. There was no alien abduction.

Gentry Fire Lookout Tower (right) is a standard federal government fire lookout tower in the Apache-Sitgreaves National Park, one of thousands across the USA, though these days many are automated or decommissioned.

A lookout tower has been situated up on a ridge in Gentry Campground, Heber, AZ, since the 1920s. It was rebuilt in 1965. The antennas and solar panels are modern additions.

Current lookout watchers have confirmed to me that then, as now, an intrepid employee of the United States Forest Service - sometimes even a married couple - were on duty during daylight hours and could (optionally) stay overnight for their shift of five days. The cab is set up for this purpose. 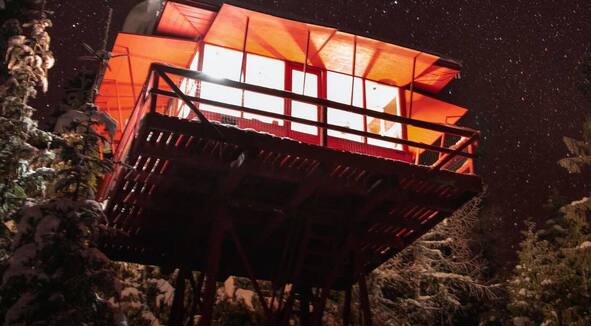 It looks so cozy at night, doesn't it? (CL-100 lookout tower, same model as Gentry) 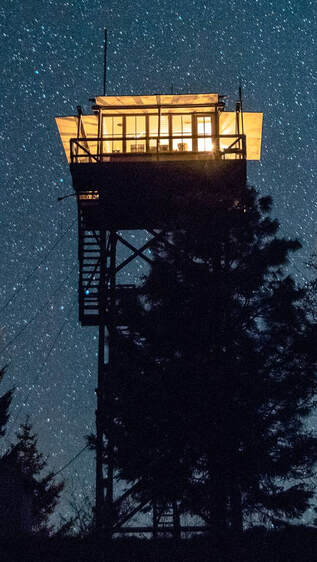 CL-100 lookout tower (same model as Gentry) under starlight
​Gentry Tower is 5 miles by road from the Turkey Springs work site where Mike and his crew were working on Nov 5, 1975. Its cab has a passing resemblance to a spaceship even in broad daylight.

What about at night, with the interior lights on and the window louvres propped open at an angle?

Read the crew's descriptions of the "UFO" they saw:

"This thing is beautiful. It was solid white and you could see the window frames coming down from it, and then there’s a frame in the middle of it. It was like two cake pans on top of each other… glowing white." - Steve Pierce with Michael Vara, Jul 2013.

"It was more or less white, sort of a golden white... And that was just the panels because it had a framework. The bottom of it was reflective, looked like metal underneath it. All made of metal and covered in shiny clean glass. It was glowing, it was actually lighting up the ground around there, but softly." - Mike Rogers on 51 Areas, Mar 2021

And from Travis himself: "It was like glass." [Paranormal Witness, 2012]

I should rename my website Liar in the Sky, because I believe that UFO's pants are on fire.​

"He always thought it was the tower"

There’s a lot of things makes you wonder... The tower, y’know. That tower looks pretty good at night time. You ever seen it at night? [Steve Pierce on UFO Classified, Jun 24, 2022]

Through personal communication in January 2022, witness Steve Pierce told me that two days after Travis went missing his uncle took him to Gentry Tower (when it was not lit) and suggested it was the UFO. His uncle had seen the tower lit up before (and also after) the incident. There was no one around and they didn't climb inside the darkened cab. Steve also relayed part of this on a podcast: UFO Classified, Jun 24, 2022.

Steve was 17 years old. He'd just witnessed what he thought was a strange craft that had taken off with his workmate, and he was under suspicion of murder. His mother kept telling him to repent and find Jesus. He was under unthinkable stress. Now his uncle was suggesting he might be the victim of a cruel hoax, that his terror was unfounded. Yet his workmates and boss seemed convinced they'd witnessed a UFO.

It's not surprising Steve couldn't see the truth - that on top of everything he'd just experienced, he would now have to accept the idea he'd been horribly tricked.

To this day, he says, some of his family still doesn't believe his version of events (he believes Mike and Travis were under mind control, and that a high-tech craft abducted Travis and took him to Area 51).

"My uncle always thought it was the tower," Steve told me, "my brother's think so too [and] a few other [of] my relatives".

I asked him: Did he take you there in order to see if you also thought it was the tower?

How could five men mistake a lookout tower for a UFO?

​We might be led astray by Mike's renditions of the "flying saucer" over the years, the two latest of which are shown here:
Incidentally, here's something Mike told a reporter at the time of the event that has been entirely forgotten since:

"it had some markings but they were too complicated to describe.” - Mike Rogers, Chicago Tribune, Nov 1975

Alien calligraphy aside, these paintings do not match the initial sketches of the UFO. Back then it was decidedly squat (only twice as wide as it was tall) and angular. Here are three sketches drawn by the witnesses shortly after the incident:
In his 1978 book The Walton Experience, Travis described the UFO as being 15-20 feet in diameter, and 8-10 feet thick. These dimensions match the earliest sketches and also match the size of Gentry tower. But the shape has morphed over the years to become a sleek rounded disc, "40 feet wide or less" but still 8-10 feet thick according to Travis in this 2019 interview.

Why did Mike, an artist, not draw the UFO as a disc in the first place?

Just as Travis had to write his book in a way that did not seem wrong to the other witnesses, Mike had to sketch something initially that would not seem wrong to them, either. Over time, with their fading memories influenced by the various Hollywood versions of the flying saucer, their initial impression of a craft looking rather like a lookout cab has been distorted.

Blast from the past

Scott Browne from UFO Classified and In the Field made contact with Kelly Waldrip, a junior high school friend of Travis and formerly of the Navy and FBI, who now runs a detective agency. On Steven Cambian's Truthseekers (Oct 12, 2021) Scott relays their 90-minute conversation:

“Travis was always trying to pull pranks on people. There was a certain time during their teenage years when Travis wanted to attach flares to balloons to fool the neighborhood into thinking it was UFOs. [Kelley] said [Travis] was always trying to come up with something to mess with people. He said as soon as he saw the story that it was breaking, he was like, You gotta be shitting me.”

After hearing about the movie Fire in the Sky, Waldrip "realized that Travis finally pulled it off, but for a much bigger audience."

On Curt Jaimungal's Theories of Everything podcast (Aug 8, 2021, timestamp 1:48:35) Travis confirmed that Waldrip was his best friend, adding: "He's definitely exaggerating anything that was said between us. People love to get attention."

The next page details the truck’s route that night, from the work site to the UFO, and back again to look for Travis. It’s a comparison between what Travis wants us to believe (based on his book) and what really happened according to Ryan Gordon after talking to the crew (Travis and Mike): they did not encounter the UFO near their work site in Turkey Springs, but at Gentry Tower.
RIM ROAD REDUX >
NOTE: Some times and dates from social media may be Australian AEST
(c) Charlie Wiser 2021