Travis describes the UFO as 15-20 feet in diameter, and 8-10 feet thick [tall]. The initial witness report to GSW gives a width of 15 feet. While these proportions match the original sketch, that's not typical "pancake" flying saucers, which are much wider than they are tall. Travis's UFO is rather squat and coincidentally matches the dimensions of the lookout tower cab (14' x 14', and about 7' tall).

Before getting out of the truck, he saw "a small round bowl turned upside down on the top. Barely visible at our angle of sight, the white dome peaked over the upper outline of the ship." This dome, significantly, is not on the initial sketches immediately following the sighting.

Travis's description of the UFO has morphed over the years. In this 2019 interview he almost doubles the diameter of the craft, stating it was "40 feet [wide] or less" but still 8-10 feet thick - a more palatable flying saucer shape.

And what are we to make of Mike Rogers' painting from Fire in the Sky (1996) captioned thus: "The incredible object has been rendered in various progressively improved representations. Yet no art could ever do justice to the imposing grandeur of what the seven woodsmen witnessed." [Emphasis mine - you can view Mike's latest sleek image on Travis's official site.]

In this interview with Joe Rogan (Jan 19th, 2021), Travis has become vague about the craft's size ("It wasn’t real huge, it was probably not as big as this room.") and "It was a classic disc-shaped craft." Well, no, it really wasn't a classic shape when this whole thing started.

Here's how Steve Pierce describes the sight back in 1978:​

Steve Pierce interviewed by Philip Klass, Jun 1978.
This really doesn't sound like a flying saucer, does it? It also doesn't sound much like Steve's description in 2013 or the images Mike has drawn over the years. 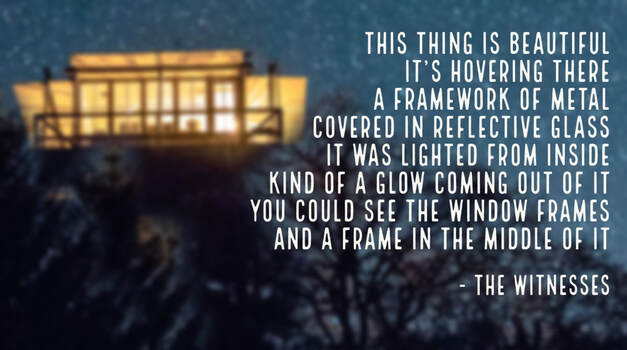 Various descriptions of the "UFO" by the witnesses over years - basically, window frames and glass with the lights switched on.
In his recent interview, Mike Rogers describes the UFO in the usual way, then seems to realize it sounds, as usual, exactly like a lookout tower and abruptly reverts to the classic "two pie pans":

​"It was three-dimensional, it was lighted, it had like a metal framework but it was very shiny. The outside surface of it was like all one piece, it was shiny. It was like looking at a car at night with a... dome light on... The windows were reflecting what’s around, and this particular thing you couldn’t see into it. There were windows but they were – it was like two pie pans lip to lip, okay." Mike Rogers on the Observation Deck with Captain Ron, Oct 24, 2021

How far off the ground was the UFO hovering? The lookout cab is 70 feet up, which more-or-less matches the initial description given in the book:

[Botanical note: Ponderosa pine grows 60-100' tall depending on conditions. From photos of this area, they appear to be around the height of the lookout tower, which sits "on" the treetops from a distance, and among the treetops from close range.]

Inexplicably, the next description of the UFO places it almost on the ground despite no indication it suddenly lost altitude:

Less than 30 yards away, the metallic craft hung motionless, 15 feet above a tangled pile of logging slash...
The craft was stationary, hovering well below the treetops near the crest of the ridge. (p.55)

My second thought is: How tall is a pile of logging slash?

This article from the Forest Service tells me a new pine slash pile is 5 feet tall, putting the UFO only 20 feet above the ground and also "well below the treetops.” Technically that's true, but if I asked you where your knees were, would your best answer be: “well below my nose”?

The original report to GSW doesn't mention the UFO’s height above the ground (at least, not in the legible parts of the report), but the drawing does seem to portray it as only a few feet above the slash pile, thus misdirecting investigators from the start in case they dared to consider the tower.

Excerpt from the initial report to Ground Saucer Watch: diagram of UFO hovering over wood pile between trees. The same report gives the width of the craft as 15', so here it is drawn between trees 30' apart.
The only conclusion we can draw, in terms of what the witnesses actually saw, is that distance, height, and size are impossible to judge in the dark. The structure holding up the tower was obscured by trees and even the claim they had an unobstructed view of the UFO in a "clearing" is not accurate, as we'll discover on the next page. 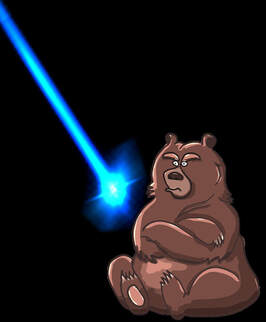 In the book, the witnesses say Travis was thrown back "10 feet" by the blue beam that zapped him. In the 2019 interview this has grown to a bone-crunching "15 to 20 feet".

​Speaking of being zapped by a blue light (variously also called a blue beam, a long blue flame, a static charge, a ray, a lightning bolt, or a bolt of energy): I've come into possession of the United States Department of Agriculture Forest Service Standard Lookout Structure Plans. Fascinating reading, but nowhere in those pages can I find the specs for an energy beam that comes out of the bottom of the thing, not even for protection against bears.

​So, what was this strange blue light coming out of the UFO?

“Talking with the firefighters, they do remember 'back in the day' hearing about how lookout towers would use colored lenses to signal other lookouts and fire crews... One color indicated that everything was ok, another color if they were in distress and one color to indicate a forest fire.” - Visitor Services, Forest Service (Apache-Sitgreaves NF), personal correspondence, July 2021

In the early twentieth century an acetylene lantern was used. Modern communication methods have replaced a semaphore system but this is definitely an interesting avenue for further research.

"This thing is beautiful"

Scott Browne has made this recreation of what the tower may have looked like on the night. The crew in the truck were about 200 feet from the tower and their view was obscured by trees. 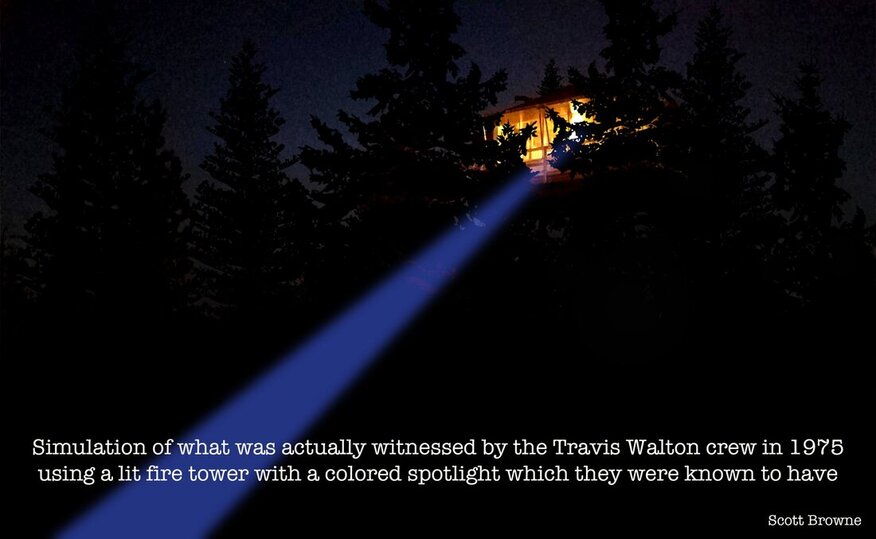 Travis's book, published three years after the event, includes details about, and dialogue from, the rest of the crew about what happened while Travis was knocked unconscious by a "numbing" beam and then missing. Clearly Travis didn't witness any of that. So where does the following description come from?

"a tremendously bright, blue-green ray shot from the bottom of the craft. I saw and heard nothing. All I felt was the numbing force of a blow that felt like a high-voltage electrocution. The intense bolt made a sharp cracking, or popping, sound. The stunning concussion of the foot-wide beam struck me full in the head and chest. My mind sank quickly into unfeeling blackness. I didn’t even see what hit me" (p.58-9)

We have to assume these vivid descriptions come from other crew members, since Travis heard and saw nothing. Given most of them had left town at this point, I think Mike was probably the main source for the book - Mike was in on the hoax so he's what we call an unreliable narrator. He says the bolt made a "cracking, or popping" sound.

But let's go back to the APRO report published shortly after Travis reappeared after his 5-day sojourn:​ 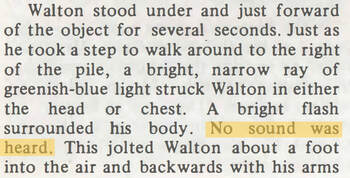 Setting aside the sound of the beam, what did it look like?

​The witnesses have re-emerged decades later to retell their story. Here's how Mike describes this powerful blue light:

"very powerful extremely bright bolt of light or energy hit him in the head, or actually the chest" - Mike Rogers, A Different Perspective by Kevin Randle, 2019

"something hit him - this beam or whatever it was, could even have been static electricity from the air" - Mike Rogers, 51 Areas with Dave Miller, March 23, 2021

Then four days later, Mike appears on the same show - this time with Steve Pierce and John Goulette. Steve challenges him on whether he actually saw the beam hit Travis:

"There was a zap, y’know, and I looked up. I didn’t see the beam that hit him but he was flying through the air backwards." - Mike Rogers, Dark Fringe Radio, May 27th, 2021

"At that time I didn’t actually see what hit him, okay? I had a lot of anticipation, anxiety building up. I just knew something was gonna happen." - Mike Rogers, UFO Classified with Erica Lukes, July 16th, 2021.

As an aside: "I just knew something was gonna happen" - in retrospect, this statement is not doing Mike any favors. But let's continue...

Steve recounted in 2013 that he'd told Philip Klass, in 1978, that if the incident was a hoax, “You’re gonna need a big generator, more than one generator because that light was so bright, one little generator’s not gonna work.”

Currently, Gentry Tower does have a generator at its base. I have no information about whether it did, or what type, in the 1970s but will update when I do. What we do know is that watchers lived in the tower for five days at a time, so unless it was on the grid there must've been a generator. 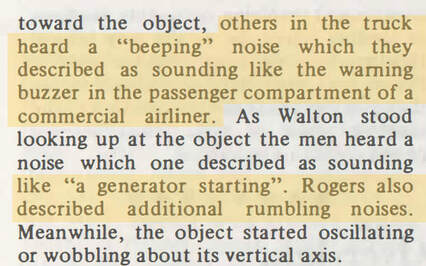 APRO Bulleting, Nov 1975
So, it seems there were some beeps followed by the generator sounds.

Don't be disappointed! The UFO noise has morphed today into all manner of "eerie and complex" beeps and whines, a high pitched alternating frequency, and a "rumbling" so low and intense it was "felt" rather than heard, and made the steering wheel in Mike's hands shake (from Travis [movie], 2015). All of this constitutes embellishments after the fact.

The accomplice springs into action

Imagine seeing that cab lit up and glowing from on high in the dark, in silence. Awe-inspiring!

Travis is so excited he leaps out of the truck while it's still moving, runs up to the tower "at an angle" (one might say, the perfect angle) with his hands in his pockets (this is always mentioned and I still haven't figured out why), and looks back (to make sure nobody is following?).

An accomplice in the tower (in this interview we learn he was a friend of Duane Walton's) - fires up the generator.

Travis ducks down. Stands up. That's the signal!

​The accomplice points the searchlight, with its blue lens, at our hapless logger, and switches it on.