or: The Limits of Travis's imagination

"​They were talking about it the week before... [Travis] would talk about what would happen if he got abducted by aliens.

Steve Pierce, UFO Classified Jun 24, 2022
Was Travis taken aboard an alien spacecraft for an out-of-this-world adventure? Or did his imagination dream up his incredible meeting with aliens?

There was no flying saucer. And the tale Travis returned to tell was so similar in detail to a couple of Heinlein's stories, it seems more likely it came from Heinlein's imagination, not his own (perhaps unconsciously, if he'd read the stories years earlier).

Below is a side-by-side comparison with Have Space Suit - Will Travel, and some additional comparisons to Universe, designated [U], by Heinlein. This research was inspired by UFOlogist Karl Pflock who noted some of these similarities in his article in the Fortean Times (Jan 2001).
In the comparison below, Travis's story is on the left, Heinlein's on the right. Regular font indicates direct excerpts. My bolding emphasizes similarities.

The abduction and waking up

NOTE: Immediately after he returned, Travis described the aliens wearing tight-fitting blue coveralls. This changed to loose billowy orangish-brown coveralls, as reported in his book 3 years later and illustrated by Mike Rogers.

Humans and the base

Have Space Suit includes additional characters such as the 11-year-old girl genius Peewee, and two distinct alien species, and covers a much longer period of time overall (the final third turns into the Star Trek Next Generation pilot episide where humanity is put on trial) but if you strip the story down, Kip's experiences and movements inside the ship, and outside it, and even some of his thoughts, mirror Travis's very closely and happen in the same order.

In the Fortean Times (Jan 2001), Karl Pflock - a UFOlogist but skeptical of this particular case - points out the similarities to Universe and ends the article with this:

"Recently, I wrote to Walton querying the matter, at first circumspectly, then quite directly. While he responded candidly to other questions I asked, he completely ignored this issue. A follow-up missive has gone unanswered." 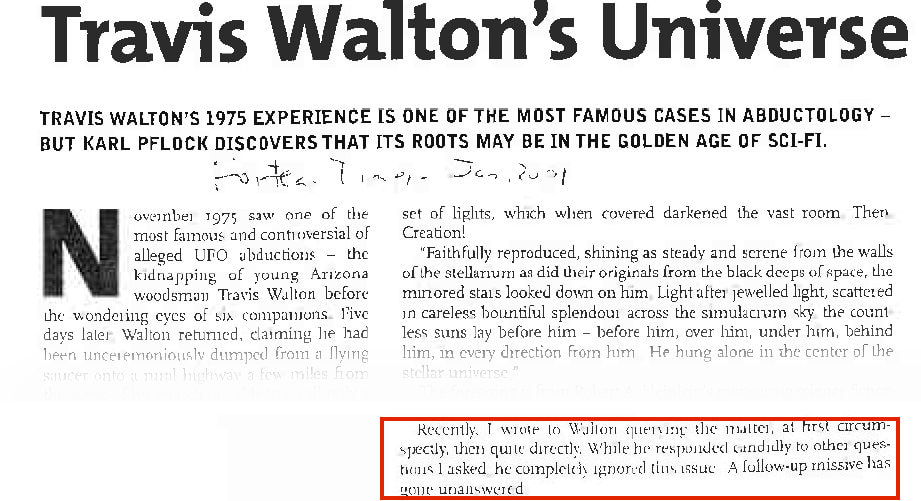 You'd think a real alien spaceship would look somewhat different from anything the most creative Hollywood production team could come up with. Instead what we get is aliens and spaceships that match the era, in this case the mid-1970s. Thanks to Curt Collins and Peter William Shelley for most of the ideas below.

​Compare the color, shape, and buttons of Captain Kirk's chair with Travis's description of the control chair he found in the planetarium:
2001: A Space Odyssey

​Compare the buttons and screens in the cockpit in this movie to Travis's description:

"On the right arm, there was an illuminated, lime-green screen about five inches square. Under that, a square of approximately twenty-five colored buttons. I looked for symbols or written words and found none. The screen had a lot of black lines on it that intersected each other at all angles. The lines had short little dashes intersecting them at regular intervals. On some of the lines, the dashes were widely spaced; on others, there were many closely-spaced dashes. The buttons below the screen were arranged in about five vertical rows, with one color for each row: red, yellow, green, blue, and violet. The colors were bright, lit faintly from within." (p. 141)