"Waving my arms is science, right?"

​​ON THIS PAGE:
What happened to Travis aboard the spacecraft was not witnessed by anyone else, and he came home without a souvenir to prove it. But what of the hard physical evidence relating to the case? 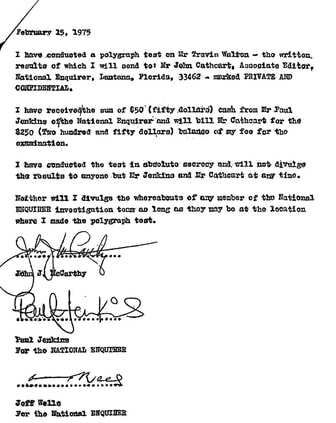 Statement signed by McCarthy and the National Enquirer where McCarthy agrees to keep the failed polygraph results secret. [Note the date is wrong]
After "being returned" by the UFO, conveniently close to a phone booth rather than back in Turkey Springs where he was allegedly taken from, Travis ended up a couple of days later in a hotel paid for by the National Enquirer.

The Enquirer had one hundred thousand dollars to give away, and they wanted to be sure the winner was credible. So they called in John J. McCarthy, an experienced polygraph examiner in Arizona, to give Travis a lie detector test.

McCarthy was sworn to secrecy about not only the results of the test but its very existence. Within months the existence of this failed test was exposed, and in 1982 McCarthy was featured on PBS's Nova in an episode entitled The Case of the UFOs, where he talks about Travis failing the test, how the Enquirer swore him to secrecy, and Travis's state of mind at the time (given he later claimed he was too upset to take the test) [starts at 33:23]:

I rendered the opinion to the reporters from the National Enquirer that the charts were deceptive, and that in my opinion he was attempting to perpetrate a UFO hoax. Well, the lid blew off the room. I thought his brother Duane was gonna throw me off the balcony. He was raging like a bull, saying that no way that his brother would lie. His tracks were very, very clear, obviously deceptive...

They went into an adjoining room and drew up a little form for me to sign, asked me to sign, to the effect that I wouldn't reveal where I had been that day, that I would say nothing about this examination... 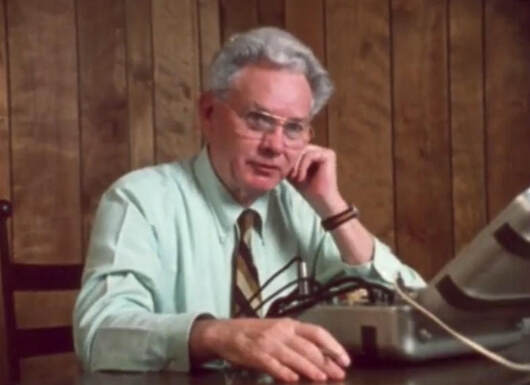 McCarthy speaking about the polygraph that Travis failed dismally (Nova, 1982) 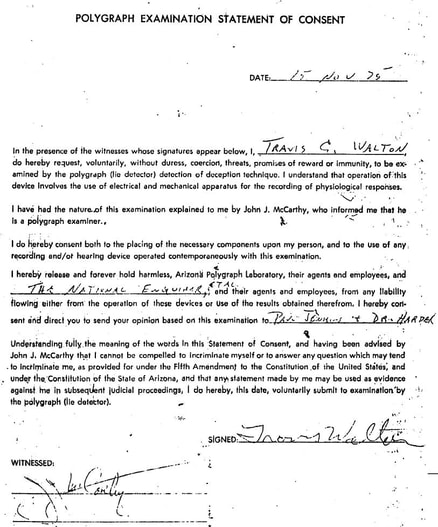 Statement of consent by Travis Walton to the polygraph, dated Nov 15, 1975

Mike Rogers made an odd finding when he returned to the "abduction site" in 1993. (This is a secret site near Turkey Springs where no UFO was seen and nobody was zapped, as we've already discovered. Travis said in the movie Travis (2015) that he would never reveal the location - except to movie producers, apparently. The site where tourists are bussed in must be some other random location.)

"[Mike] noticed that the trees nearest where the craft had hovered seemed to have grown far more than would have been natural in the intervening seventeen years... His long forest career made him aware that the thinning process alone can induce accelerated growth. But these trees are in the clearing, so no competing trees had been removed from near them." (p.272)

Given my theory that Mike was part of the hoax, his report doesn't mean much. Still, it would be awesome if Mike had sent his findings for a second opinion...

"Mike wondered if there might be another explanation. He considered consulting a forestry expert to confirm his observation and calculations. Where could anyone be found who was sufficiently objective, and willing to take the consequences of passing official judgment on such a question? Obviously, pursuing it would be futile." (p.273)

All Mike had to do was ask a third party to present his findings and get an expert report done, with the expert never knowing it was in relation to a UFO abduction. But no, that was considered "futile", so Mike didn't even try. All we have is what Mike tells us.

Seems to be a recurring theme.

In March 2022, Steve Pierce on Facebook offered his opinion on the tree growth in the area: "The reason it grew is because that was our job. We cut everything down from 6 in around and smaller. We thinned out the forest. Its like a garden, if you pull the weeds your garden will grow better. That's where the growth came from."
​ 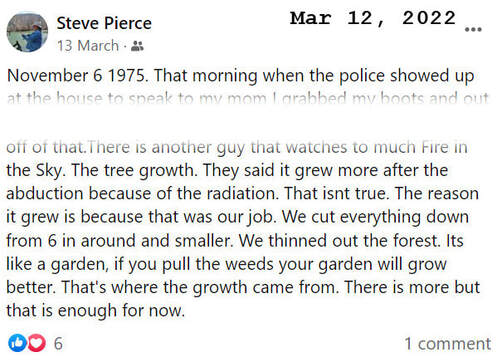 Steve Pierce, Facebook [screencap taken in different timezone]
For the movie Travis, a film crew went to this site in 2014 so Ben Hansen could do a "field survey".  I don't know what Ben's qualifications are to be doing science-y stuff, but hey he's from the SyFy channel which sorta has "science" in its name.

This is a step-by-step guide to Ben's scientific method:

STEP 1: Stand in a pretty clearing and wave arms around importantly, using words like extreme growth rate and directionality. 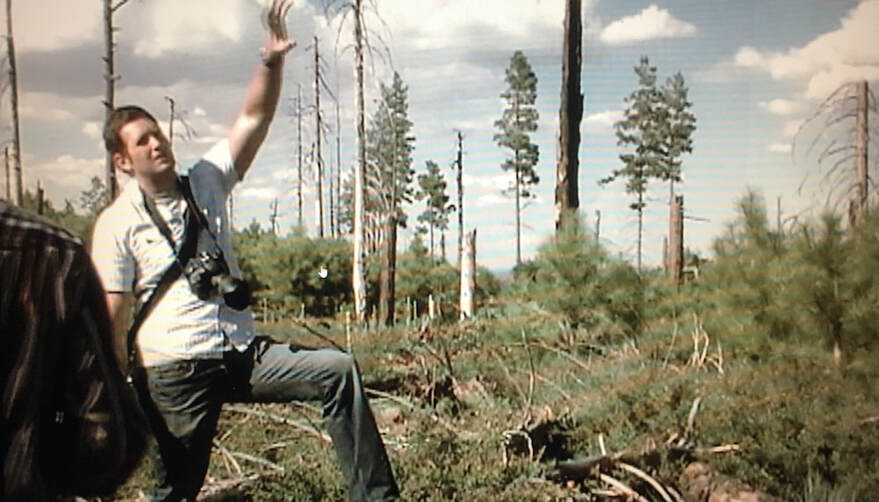 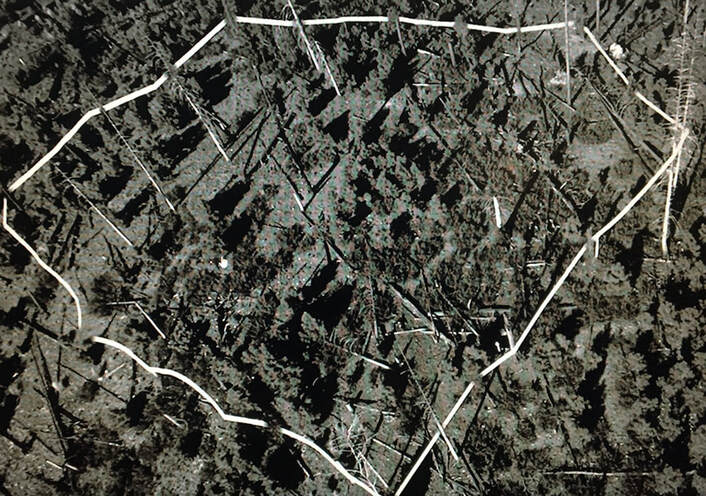 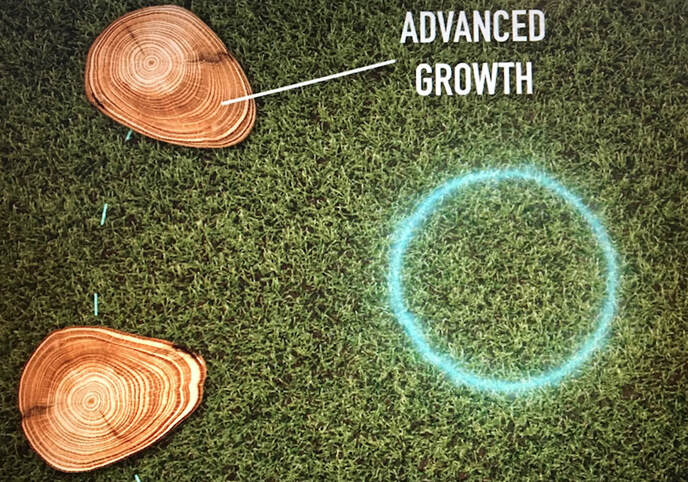 Still from the movie Travis (2015): "Advanced growth" of tree rings that was absolutely positively identified at the site with science, as demonstrated by computer animation.
STEP 4: Write report for teacher with lots of numbers.
[Note: Someone warned Ben not to use comic sans if he wanted to be taken seriously, so he used the closest font he could find.) 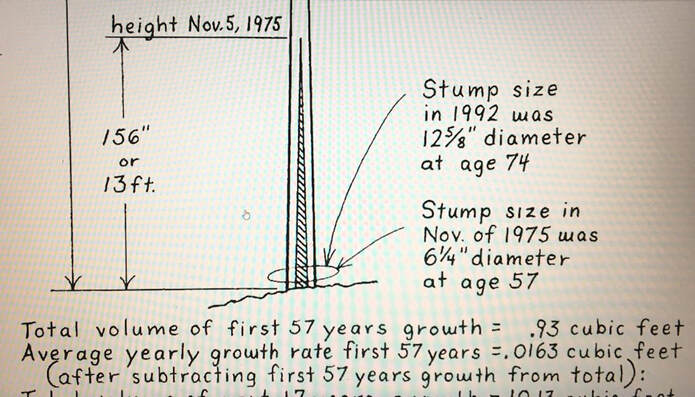 Still from the movie Travis (2015): The Scientific Report
Here's Steve Pierce again, explaining photosynthesis for Ben: "I was there that day when Ben Hansen is talking about the tree growth... When he talking about the rings around the tree and that one side is longer than the other side he doesn't tell you that's where it gets the most [sun]." 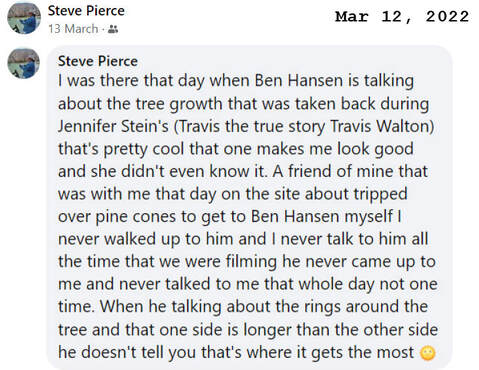 Steve Pierce, Facebook
Travis says that Mike Rogers' core samples from the trees showed thickened growth rings and accelerated growth on the side facing the clearing where the UFO hovered. Cool beans. If Dr. Mike has written up his findings and had them peer reviewed, I'd love to see the final report. I'd love to know his sample size and controls, just for starters.

Again, did nobody consider sending the samples via a third party unconnected to UFOs? Travis mentions the physical evidence surrounding this incident constantly, yet gives up very easily when trying to actually procure physical evidence.

While the above section of Three-Dollar Kit accurately describes, to the best of my knowledge, the level of scientific rigor that went into examining the tree rings, other portions are satire. No disrespect is intended toward Ben Hansen, and I have graded his Field Survey: B-. 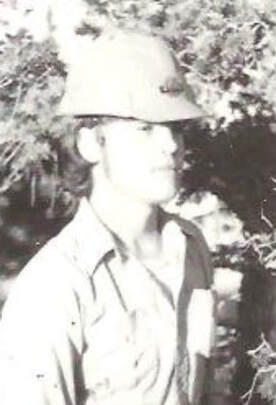 Steve Pierce in the hat he didn't want to wear for the picture, and never wore for work.
What's the deal with UFOs and radiation? Aliens can traverse light-years with ease, but can't fix a leaky boat?

In Fire in the Sky (1996), Travis describes how a Forest Service employee found no radiation at the site after "checking the ground about halfway to the pile" (meaning the slash-pile of dead wood that the UFO had been hovering over). (Remember, the "site" is a random location near Turkey Springs where no UFO hovered and nobody was abducted.)

Mike Rogers then suggested the employee check his and Allen Dalis's hard hats. These items made the Geiger counter move. Radiation!

Yet those hard hats, if they'd been in the truck that night, had been no closer to the UFO than 30 yards. The Forest Service employee was much closer than that and found nothing. Why would the hard hats be radioactive, but not the site itself?

(Needless to say, Travis's clothes were never tested for radiation because the plastic bag they were put in got torn. As we know, radiation can be sealed inside a plastic bag and once it's torn the radiation escapes or something.)

But there's more. Steve Pierce will fill you in:

"The last time I saw Travis was we took a group picture [for the book], and then we took separate pictures with a hard hat on.

"He bought a brand new hard hat… You see all of us the book wearing a hard hat. We’re all wearing the same hard hat.

"I told him 'I don’t wanna wear this hard hat, we didn’t wear them at work,' you know? He said, 'You either wear it or you’re not in the book.' He must’ve told me that twenty times. 'I’ll keep you out of the book!' 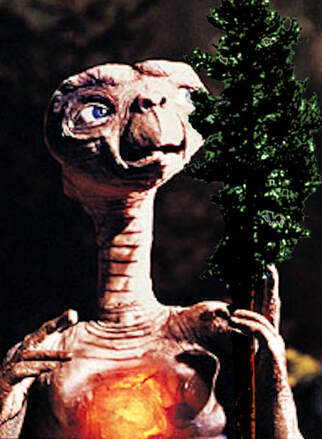 Pondering ponderosa pine: ET's only hope?
What medical condition would we expect a young man to be in, after being zapped with a powerful beam, being thrown 10-20 feet through the air to land on rocky ground, and spending five days aboard an alien spacecraft?

Travis Walton has hand-waved away any problems with his recent change of heart over the reason he was taken aboard in the first place. He proposes that the beam accidentally killed him (because he got too close to the flying saucer), and the aliens revived him.

If this is "true", it appears the aliens had no intention of abducting anyone. They were hovering around the Mogollon Rim for some other purpose - collecting samples like famous botanist E.T., for example. Perhaps the essence of Pinus ponderosa was the only cure for a plague devastating their home planet?

For aliens with the technology to revive a dead man, fixing up any burns, bruises, and scarring is presumably super easy (although repairing his burned clothing is a little harder to explain).

We can't know the aliens' objectives, and Travis doesn't claim to know either. Here's the scant physical evidence provided by his flesh-and-bone body:

Seven guys saw a lookout tower, and look where it's gotten them.
CONSEQUENCES >
(c) Charlie Wiser 2021