If the thing that we saw didn't scare 'em, my driving certainly did.

Crew boss to the rescue

Mike Rogers played a vital role in the hoax, even if it wasn’t his idea and even if he wasn’t sure how the UFO would be created. He deserves a page of his own!

This entire story hinges on what the witnesses saw during that 30-second stop on the road. After seeing the UFO zap Travis, they became terrified. They suffered for five days as murder suspects while Travis was missing. They were completely convinced they'd seen a UFO.

Travis did return with an amazing story about being aboard alien vessels and seeing aliens (he also underwent regressive hypnotherapy a few days later, but "I did not recall any experiences under hypnosis that I could not remember before" (p.24)). There's no physical evidence this part of the tale is anything more than a fabrication.

All we have is what the guys in the truck say they saw.

Let’s position the actors on location, at Gentry Tower:​ 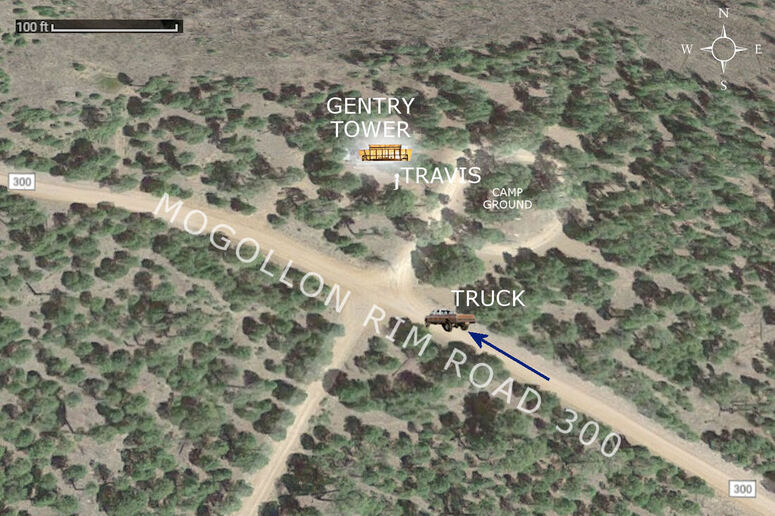 Gentry Campground and Tower, location of "UFO", Travis, and truck on Rim Road (300).
But wait, wasn't the UFO in a clearing? Didn't the witnesses have an "unobstructed view" of the UFO? That's what the movie shows!

Gentry is actually in a clearing, in the sense that it's in a campsite with no trees immediately in front of it. However, from where the truck is located there are trees obscuring the view. The book is not entirely clear about how clear this clearing is. Let's read it carefully:

We rolled past the intervening evergreen thicket to where we could have an unobstructed view of the source of the strange radiance. Suddenly we were electrified by the most awesome, incredible sight we had seen in our entire lives... [Travis gets out]

I quickly stalked closer to the mysterious vehicle. Stepping over a low-leaning fir sapling, I carefully picked my way through the opening in the trees.

Travis has to go through an "opening" in the trees to reach the craft. This is not a wide open space (and let's just note that he is not going up a hill - this was added to the mythology later because the "official" abduction site is on a steep hill that a grown man cannot "quickly stalk" up).

In a 2020 interview, witness John Goulette confirms the clearing is actually full of trees:

"There was a clearing, and in the middle of that clearing was a pile of dead wood that they’d piled up to burn. I think they’d done it like 40 years before, when they were logging. They just never got around to burning it... There was some new growth in that clearing, so it’s probably a clearing they made when they were logging, but like I said they never got around to burn it. I think that’s basically what Travis was kinda behind, walking up to that thing, was the new growth. - John Goulette, Paranormal UK Radio Show, Nov 11th, 2020

So there were 40-year-old trees in this "clearing" that Travis went behind (from John's point of view in the truck). Google tells me Ponderosa pine grows 12-18" a year, so we're talking about trees that are at least 40 feet tall, and dense enough that Travis had to "pick" his way through an opening. Add to this his angled approach to the craft (which Steve Pierce always mentions, so apparently it struck him as odd), which should not be necessary if the clearing was open, and what we have is very much an obstructed view of the stilts of the lookout tower, even if the cab was easily visible, and an obstructed view of Travis as well.
Instead of driving closer, Mike stopped the truck just short of the campground entrance. Had he gone a few yards further up Rim Road, the crew would've have had a much clearer view of the UFO... and the scaffolding holding it up.​

Mike's precise actions that night drove the entire experience. He chose where to stop, he turned off the engine so nobody could urge him closer, and he knew when to drive away in a panic - immediately after Travis was zapped, in case anyone got any ideas about jumping out to help him.

Travis has made a very big deal about not blaming the crew for leaving him. Because he needed them to leave. If they'd hung around to investigate, they'd have found him alive and well and realized the UFO, up close, was not so otherworldy.

​In Travis's retelling, after he was struck by the beam the guys in the truck were screaming at Mike to leave:

“It got him!” Steve yelled.

Dwayne [Smith] screamed: “Let’s get out of here!”

“Get this son of a bitch moving!” Allen shrieked hysterically.
​
Mike did not need to be asked. He was already desperately groping, fumbling around for the ignition switch... (p.59)

But Steve's memory is a little different:

Steve claimed in 1978 the other guys couldn't even see the UFO (or what he mistook as deer hunter lights) because of their position in the truck:

"The rest of those guys didn't even see what happened... I was blocking the view of the two guys sitting beside me." - Steve Pierce interviewed by Philip Klass, Jun 1978.

A Brief Encounter of the Third Kind

How long did the crew actually see the craft for? Did anyone really see it take off?

Travis wrote that he "quickly stalked" toward the UFO. In his 2021 interview on Joe Rogan he "ran" toward it. Let's assume he jogged over at 4 or 5mph. At that speed he'd cover the distance in 12 to 15 seconds, though he stopped and looked back once (let's add 5 seconds) and walked the last few yards (add another 5 seconds).

The ship started to wobble so he ducked behind a log. "I resolved to waste no time in getting the hell out of there!" (p.58) Halfway out of his crouch, he was struck by the ray and thrown back. While the telling of this part of the event takes a page in the book, the actual actions described - crouch, quickly stand, immediately getting hit and thrown back - it would only take about 5 seconds. Steve yelled: "It got him!" and Mike immediately drove off.

Mike corroborates this timespan, adding an additional 15 seconds for starting up the truck and leaving (elsewhere he's said anything from 3 to 8 seconds):

Did they see the UFO following them as Mike hastily drove away? In the book, Travis describes the scene thus:

[Mike] frantically spun the steering wheel one way, then the other, navigating the tortuous road.

“Is it following us?” he yelled over his shoulder. Nobody answered. “Is it after us?” he shouted again.
​
When again no reply came, he turned to see the looks of stupefied shock on the faces of his crew. Their pale faces stared straight ahead, blankly. He knew then that it was entirely up to him to get them all to safety. (p.59)

In SyFy's 2012 Paranomal Witness, Steve recounts (as they drove away): "Mike kept saying it was following us, but I don't think anybody was looking back." [11:32]
​
So, that's a firm no. Nobody saw the UFO following them, but Mike made sure they remained panicked. Remember, all they actually saw was a hovering UFO through the trees, a blue ray of light, and Travis being thrown back.

Travis describes the guys deciding whether to go back for him:

The men scrambled to look. One of the men ran to the front of the pickup. "What was it?" he asked.

Mike told them he thought he had briefly seen the outline of the golden disc through the trees to the south. It had raised itself vertically to treetop level and streaked away toward the northeast at incredible speed. (p.63)

While the book says Mike "thought" he saw it leave, and retellings over the years include this in the story, the witnesses did not report the “unbelievable acceleration of that streak” initially. Why would anyone leave out such a stunning sight?

From the initial report to GSW:

Excerpt from the initial report to Ground Saucer Watch: witnesses say the UFO did not speed up, change direction, or rotate.
Note also that in SyFy's Paranomal Witness, which included new interviews with the witnesses and a recreation Travis has called accurate, nobody in the contemporary interviews mentions seeing the UFO depart, and nor is it mentioned or shown in the recreation. Did the FX budget run out?

By the time of this 2019 interview, a new tale is firmly established to bolster the eyewitness accounts, with Travis saying: "When they headed back, they saw the craft taking off towards the northeast."

Notice that sneaky "they"? No, initially nobody saw the UFO leaving, and in the book only Mike claimed to have seen it leaving.

After Mike has killed some time suggesting they build a fire, and then chasing after a camper-pickup for hunters with guns, the guys discuss returning to the site to check on Travis. They do return, about 15 minutes later, and ​the book spends some time recounting their doubts about whether or not they're in the right place:

[they get out and look around]
​
“Maybe this ain’t it,” Ken suggested. “All these piles look alike.”
“I thought it was farther down that way,” Allen said, pointing north down the ridge.
“Naw, if anything, it was farther back up that way,” Ken countered.
“No, I remember this spot,” Dwayne insisted. “See that tree leanin’ down over there?” (p.65)

I don’t think they were in the same place. Mike probably turned off Rim Road onto a random logging road (or one he’d previously scouted out - he was missing for two hours that day, remember?) Between them, the guys convinced themselves it was the same place. Of course there was no sign of Travis or the tower (now in darkness).

So why does Travis, here in the role of narrator (since he's not on the scene), harp on the guys' doubts over whether it's the same spot? To cover up the hoax, shouldn't he write the scene in a way that makes everyone look absolutely certain?

I think there are two reasons. Firstly, this scene is probably fairly accurate - they were in a different spot, and to some of the guys it didn't look right.

Secondly, when people are not being quite truthful, they can overcompensate (often subconsciously). It looks like Travis included this dialogue to ensure readers come to the conclusion that despite all these meticulously detailed doubts, this was definitely the same spot since the guys ended up searching this area exclusively. The group consensus - which has persisted through the decades, without challenge - settled on it being the same location as the UFO was seen.

While Travis was missing, the remaining six men had a tough few days. Where was Travis? Why did he return after five days? And how did the crew pass their polygraph tests if the whole thing was a hoax?
​FIVE DAYS OF HELL >
(c) Charlie Wiser 2021